The weekend of June 26-28th is the Shipley Street Arts Festival, co-ordinated by our good friends over at Q20 Theatre. There’s lots of activities and performances for all tastes and ages, many of them taking the river and canal as a watery theme…  We’ve got a hand in various events including the water flume demonstration near Shipley Library (from noon on Saturday 27th), and the duck race from Baildon Woodbottom Working Men’s Club (1pm, same day), and on Sunday 28th there’s a special screening of our short film Wading to Shipley at the Ibis Hotel. Multi-Story Water‘s main contribution to proceedings, though, will be this:

This new, interactive promenade performance will be directed by Simon Brewis, and performed by David Smith and Lynsey Jones. All three were part of our original, 2012 Multi-Story Water performances, and we’re delighted to have them back for this project. The Seven Bridges include some obvious ones and some less obvious ones, so do come along and discover the trail… (it’ll end up not very far from where it starts, you’ll be reassured to know!)

Meanwhile, on the very same weekend, just a few miles downstream, the Leeds Waterfront Festival is taking place. So to create a bit of a conceptual “bridge” between the two festivals — and between Shipley and Leeds — we are also presenting this:

Now that’s actually a photograph from Shipley (Amber Wharf flats viewed from under Junction Bridge, at Dockfield) but the designer liked the picture, and it sort of works for Leeds too… where there’s a whole lot of new build flats by the water!

Anyway, the Leeds piece will be performed by Steve Bottoms, who will be supported musically by the very wonderful Eddie Lawler (the Steve and Eddie partnership is now a recurring one, and also dates back to our 2012 MSW performances). In theory, it’s possible to see both Seven Bridges pieces in the same day, if you do Shipley at 11.30am and Leeds at 3.30pm. Or you can do them different days. You don’t have to do both, of course, but they will, we hope, complement each other in interesting ways… And it is all free, so you can’t go wrong! 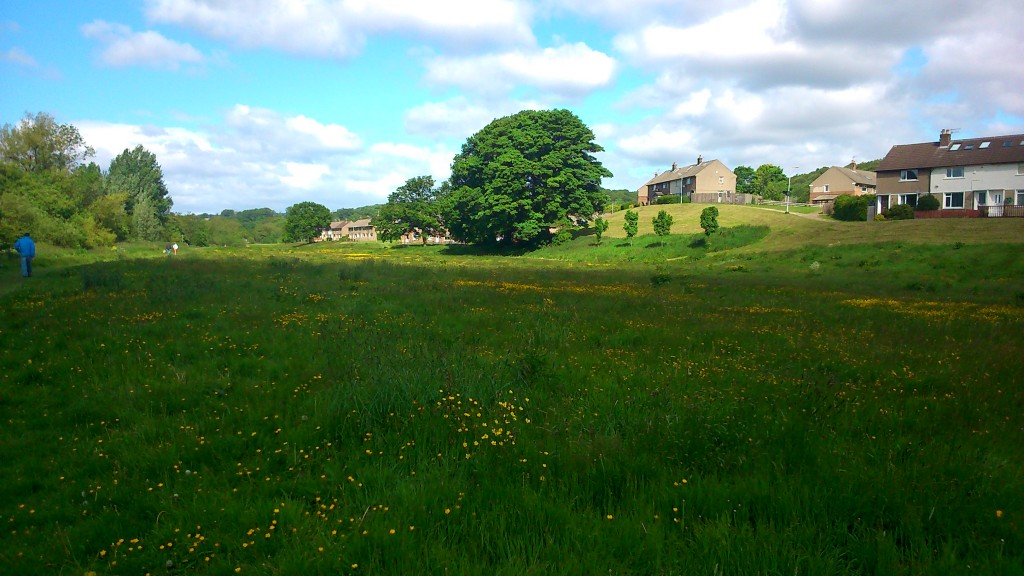 This grassy flood plain next to the river (the riverside path is where that man in blue is walking to the left) has traditionally been mowed fairly regularly by Bradford Council. But in an age of austerity, they’re letting the grass grow… The buttercups have taken the opportunity to add a sprinkling of yellow to the “monoculture” green… 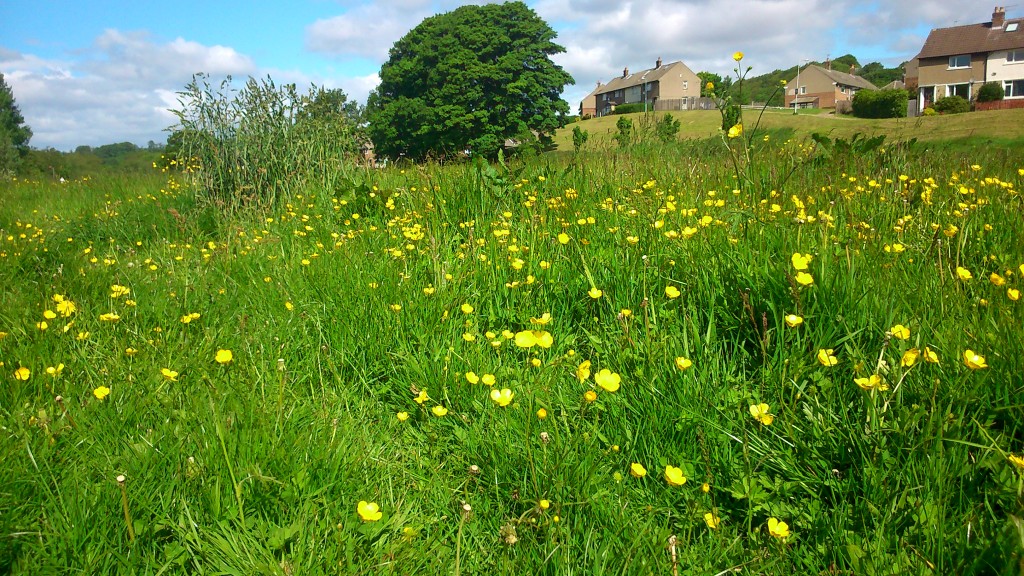 And there are larger wildflowers, too, growing up tall because they haven’t been annihilated at birth… 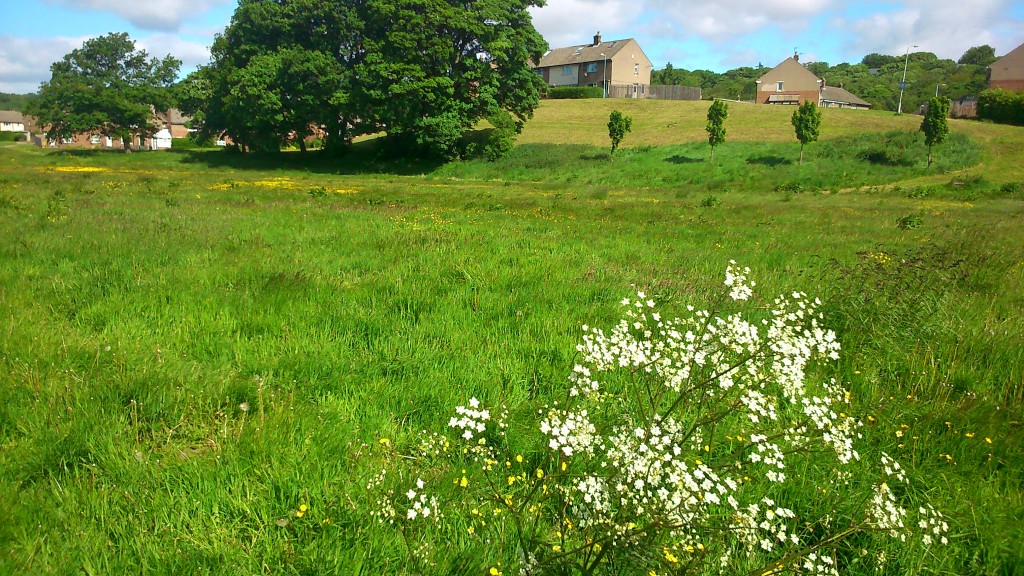 Recent meetings at the rowing club with residents from the estate have led to the idea of campaigning to turn this into a “real” wildflower meadow — seeded with poppy and cornflower, perhaps — to bring vivid colour to the area. It’s an approach that has already been applied up at Northcliffe Park. And the other weekend, by way of kicking this off, a group of us got together to do some planting… 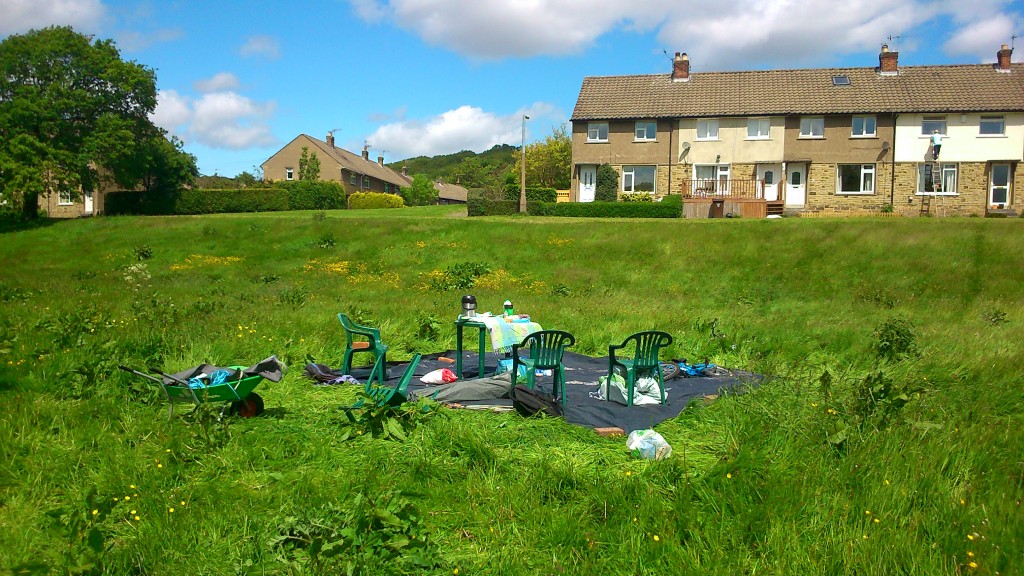 Here’s the remains of the gazebo tent we put up for shade and as a refreshment area. The wind was too strong for it so we had to take it down again… an outcome indicative of how our whole plan started to go a bit south! The Council had provided us with some “plugs” to plant amid the long grass, to provide colour… but in the event it turned out that the plugs were too small, and the grass too long, to plant in the “meadow” proper. Nor, in fact, were they the promised poppy plugs… they turned out to be begonias!

Anyway, we made the best of the situation by electing to plant the plugs in the shorter grass at the edge of the riverside path (the path is the one bit of the field that is getting mown!). This in the hope of creating a little avenue of yellow to greet walkers coming by. And meanwhile Irene (below, accompanied by some local children who joined us to help out) found got some poppies from her own garden and determinedly planted them in the field outside her house on Bowland Avenue! 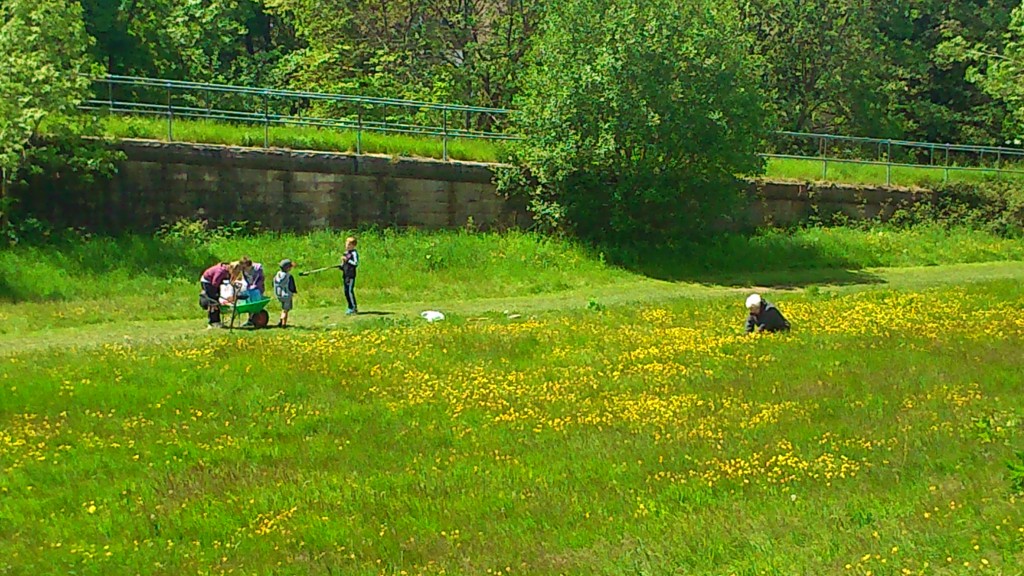 So, not exactly the day we’d had in mind, but from small seeds grow great, er… well you get the idea! Fun was had by all, plenty of jokes shared, and I was treated to a beer by Irene’s neighbour Ruth when we packed up. The campaign continues! 🙂