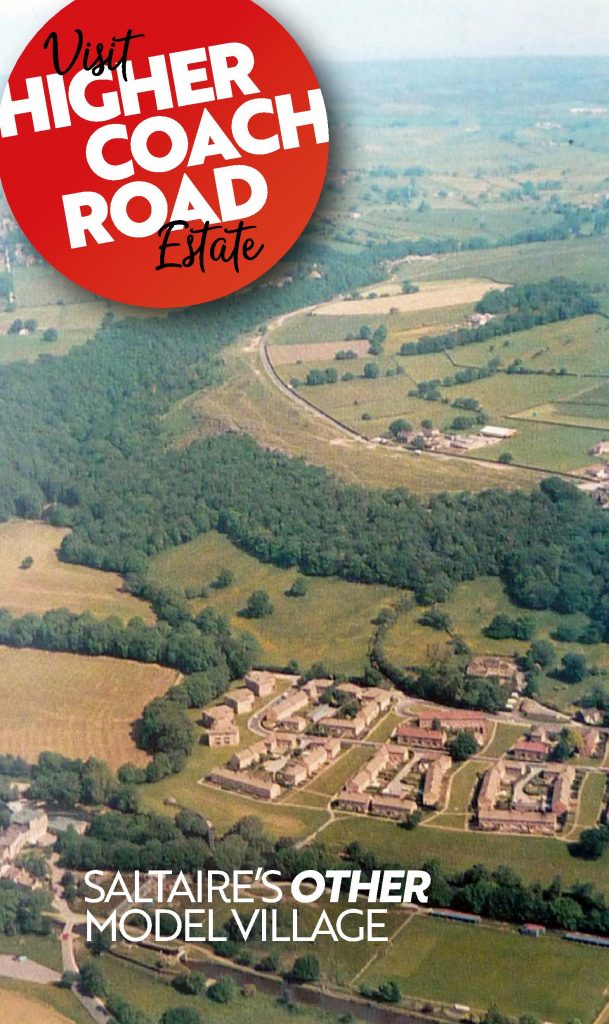 Welcome to Our Airedale Home was the title given to two quite different ‘performance’ events that were presented — in consecutive years — as part of Saltaire’s annual World Heritage Weekend in April (which celebrates the village’s UNESCO World Heritage Site Status. In many ways, the title was just a flag of convenience, as something to include in the WHW events listing. What the two events had in common, though, was that they were collaborations between Multi-Story Water and the Higher Coach Road Residents Group (HCRRG). In both cases, there was a playful attempt to extend the notion of “heritage” beyond the familiar narrative associated with Saltaire’s Victorian industrial history, in order to celebrate other stories and another nearby neighbourhood…

The 2016 version of Welcome to Our Airedale Home looked back into history beyond the Victorian period, by thinking about some of the ways in which Airedale residents might have lived and worked in the pre-industrial era, using the natural resources of the valley. The centrepiece of the presentation was a demonstration of a traditional handicraft — as seen in the video clip above. Craig and Stewart, of Higher Coach Road Residents’ Group, used a pole-lathe driven by man-power and the springy tension of a fallen branch to whittle wood for furniture…

Around this eye-catching presentation (which drew much interest from passers-by), we assembled an informal collection of related activities. Storyteller Irene Lofthouse told Airedale myths and legends, while Eddie Lawler and Steve Bottoms involved passers-by in a process of writing verses for Eddie’s song “Welcome to Our Airedale Home” (whose title, obviously, we had borrowed). The song dates all the way back to the 1970s, when it was written as a protest against a proposed Aire valley motorway link (“there’s always a welcome around, IF you leave the place as you found it“), but it had only a chorus — no verses. So we wrote new verses for the song based on what passers-by told us they loved about their Airedale home, and performed them on the spot…  (A more detailed, illustrated blog account of 2016 event can be read here.)

The 2016 presentation placed us alongside other WHW stalls and stands in Roberts Park: this was a deliberate decision to announce a Higher Coach Road presence within Saltaire itself (although the estate is of course right next to the park – and as such is actually closer to it than the mill village is!). By 2017, though, the HCR Residents’ Group had developed enough of a profile get the estate officially “on the map” of the WHW: 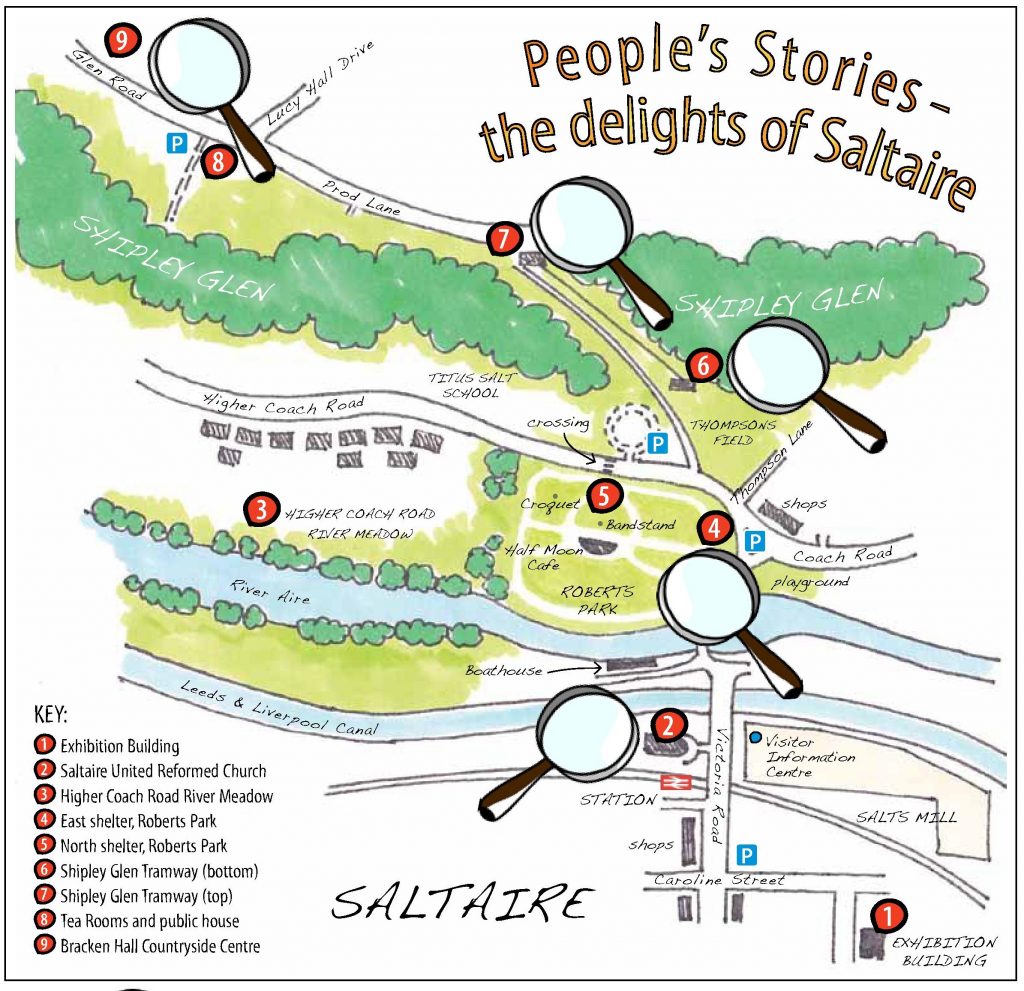 Two events were advertised as taking place on the ‘Higher Coach Road River Meadow’ — informal storytelling and songs by Steve and Eddie, under the Welcome to… title, and a 1950s-themed picnic, put together by HCRRG for residents and visitors. In practice, though, these two elements became one, with the storytelling ensconced comfortably as part of the picnic. Here’s what it all looked like from a distance, during setting up. 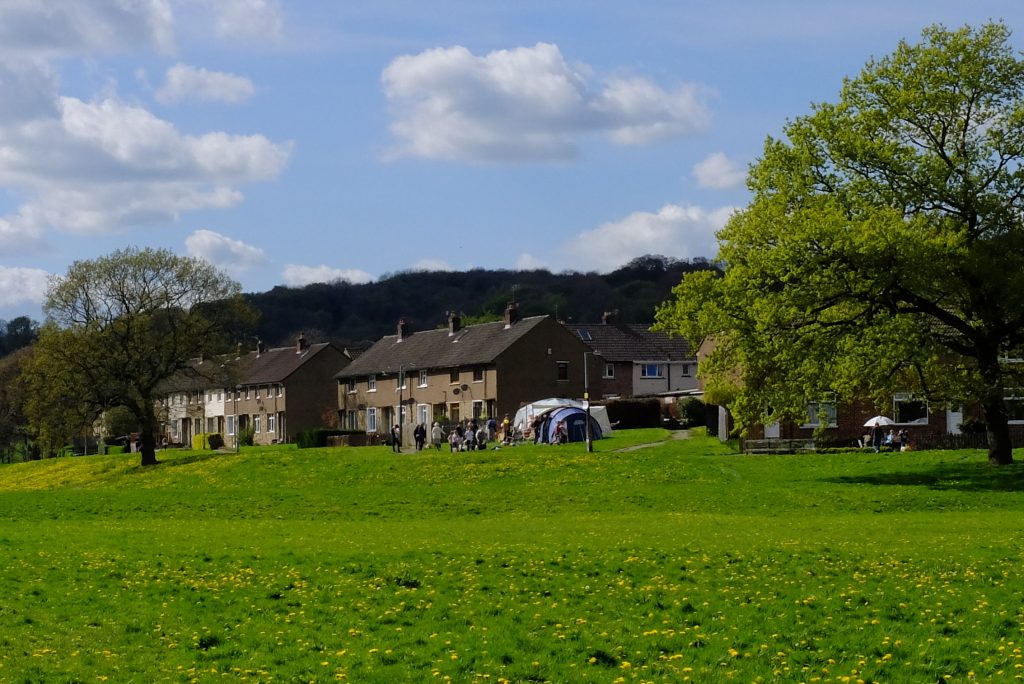 The 1950s theme for the picnic, suggested by HCRRG’s Ruth Bartlett, was of course inspired by the fact that this estate was built in the 1950s, by Shipley Urban District Council: it was part of the post-war dream of decent, affordable housing for all. The heart of the picnic was of course the food stall, selling beautifully made cakes and sandwiches (in aid of HCRRG). The gazebo advertised its 50s food credentials! 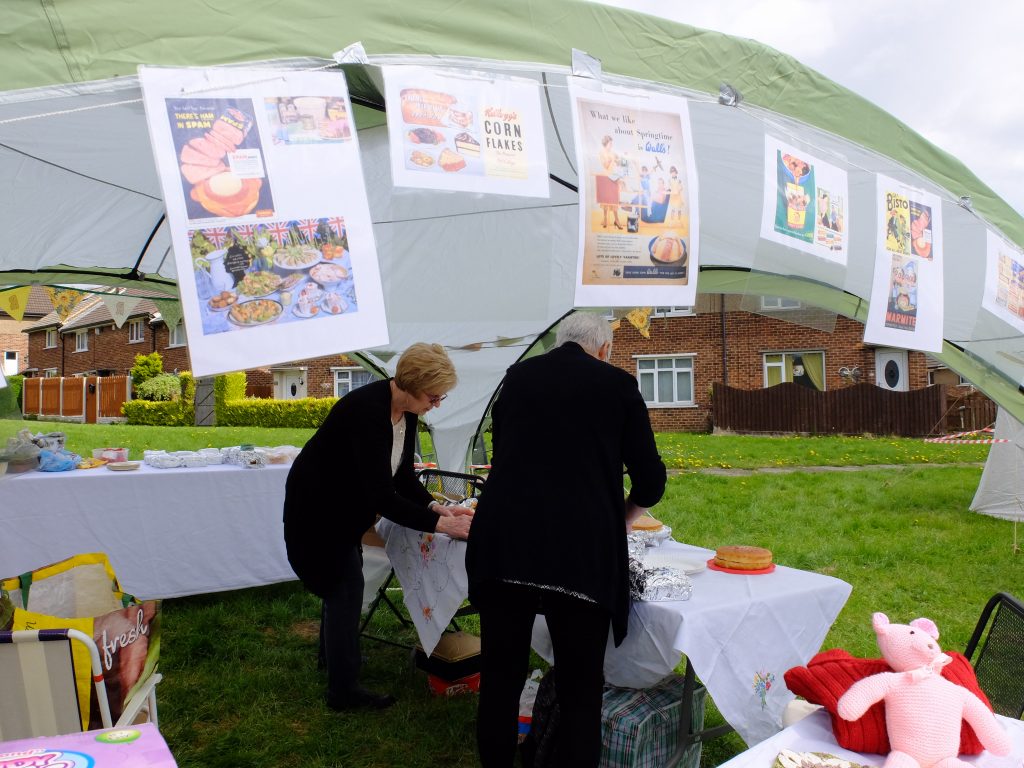 The food stall was masterminded by Irene, Hazel, Elsie and Pat (seen left to right in the picture below, with Hazel and Elsie in the middle), with help also from other friends and neighbours. Great job all of you! 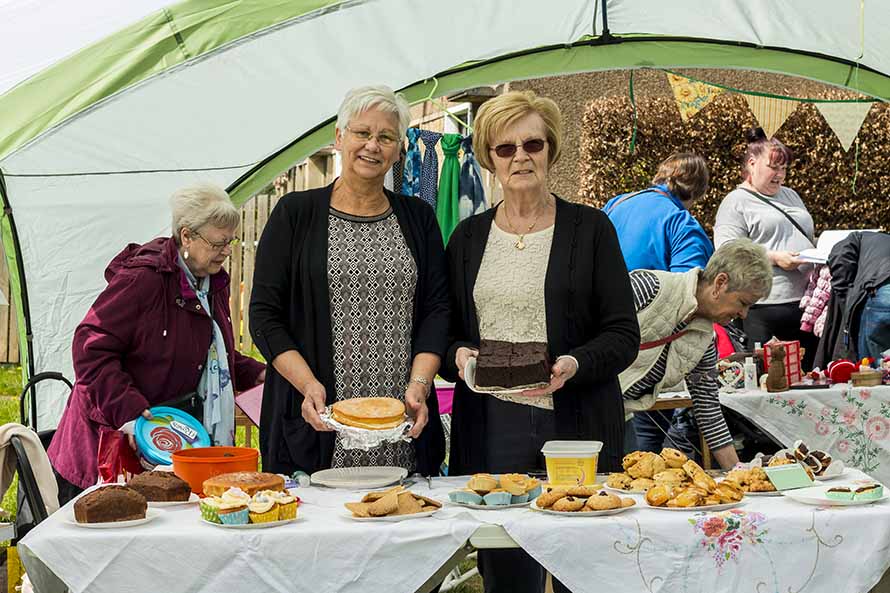 The residents also erected a kids’ play tent and encouraged them to play 1950s-style outdoor games like hopscotch and ring toss (see our gallery of black-and-white pictures of the picnic by photographer Nigel Terry, who also took the better colour pics here!). 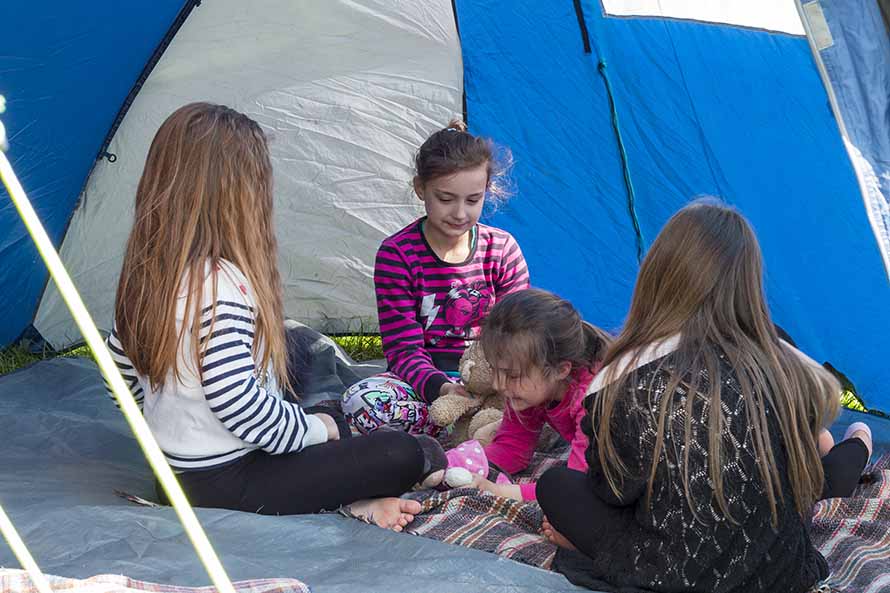 Between the food stall and the kids’ tent was this… our “outdoor living room”. Inspired by the lyrics of Eddie’s song “Welcome to Our Airedale Home” (“we’ll go and put the kettle on, if you’ll just sit yoursen in a chair”) we wanted to create space for people to sit, chat and laugh — just as if in someone’s home, but where everyone is welcome. 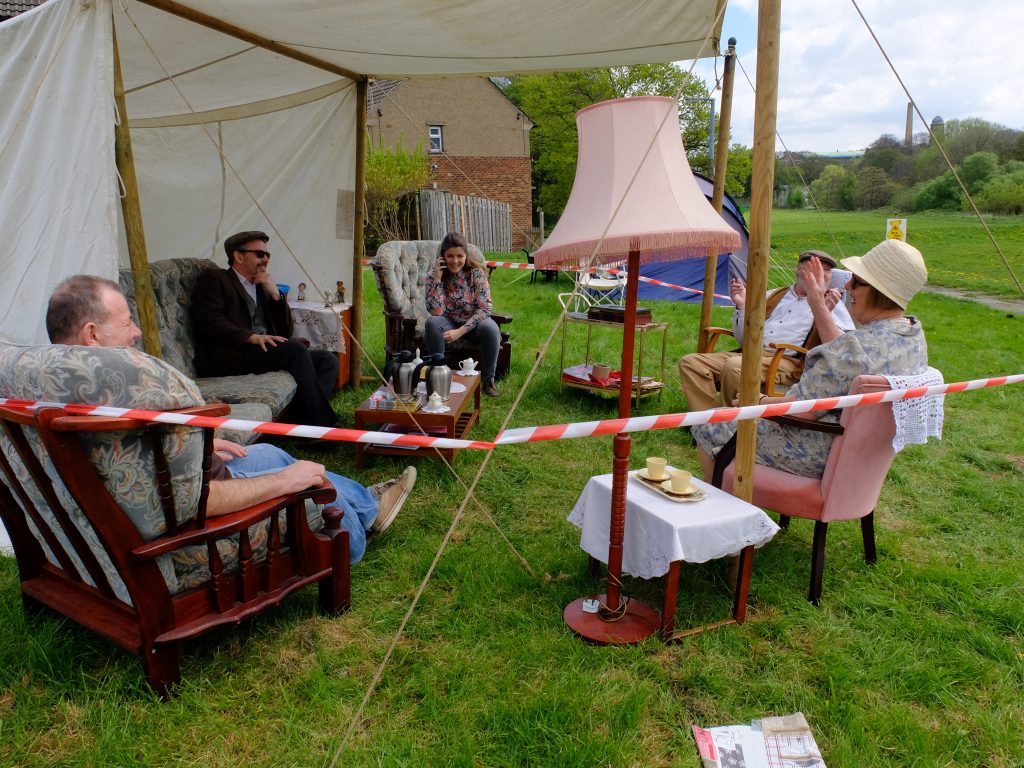 The red hazard tape stood in as “walls” (so that we all knew where the “door” was, and so that nobody tripped on the guy-ropes of Stewart Gledhill’s white tent – as also featured in last year’s WtOAH). The furniture had been gathered and assembled by Anna Parker (in the centre of the pic above, on the phone), with 1950s knick-knacks added by various residents’ group members… 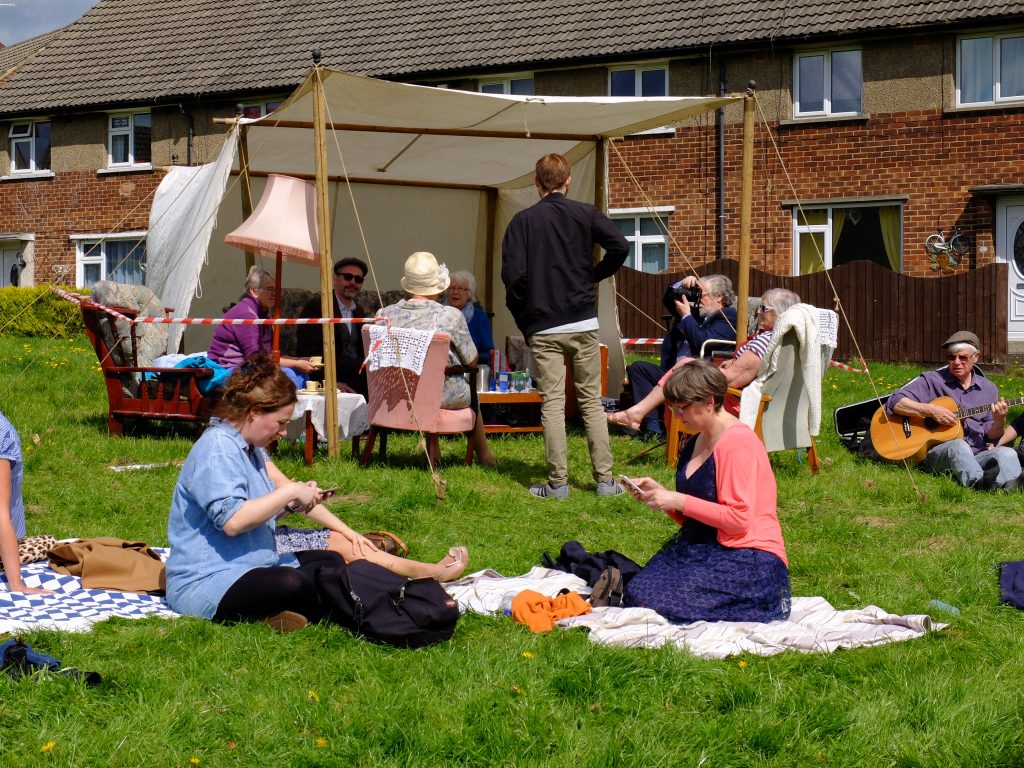 During the afternoon, lots of people happened by the picnic area, to hang out in the sunshine, chat about the estate and its history, and listen to Eddie play (there he is on the right, above). Picnickers included both residents of the estate and World Heritage Weekend visitors from around and about (I spoke to a group up from Halifax, and there were even some French visitors!). 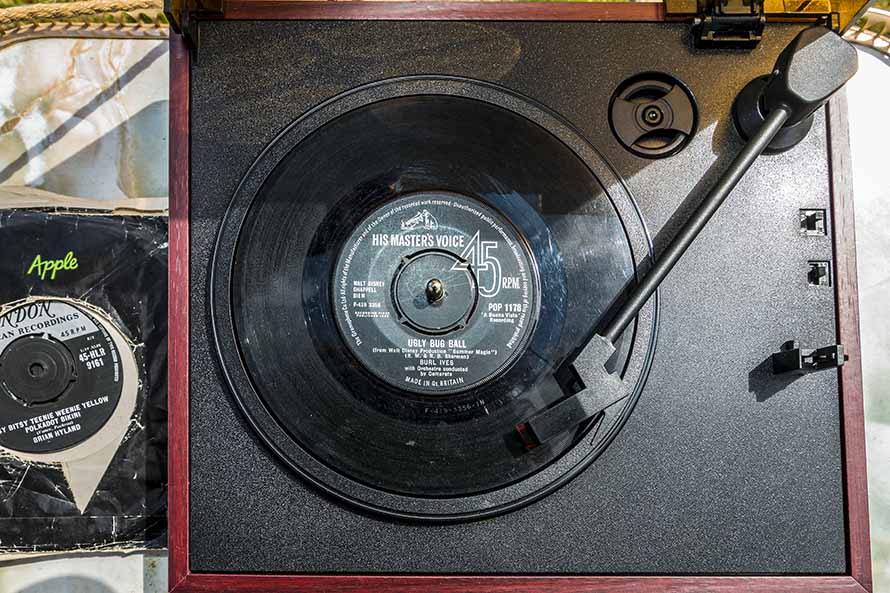 Also for music, we had in our “living room” this old record player to play 45s and even 78s, from the 1950s and early 60s (“Itsy Bitsy Teeeny Weeny Yellow Polka Dot Bikini” proved a particular favourite). Power to the record player was provided by a generator installed down on the field at a safe sonic distance… 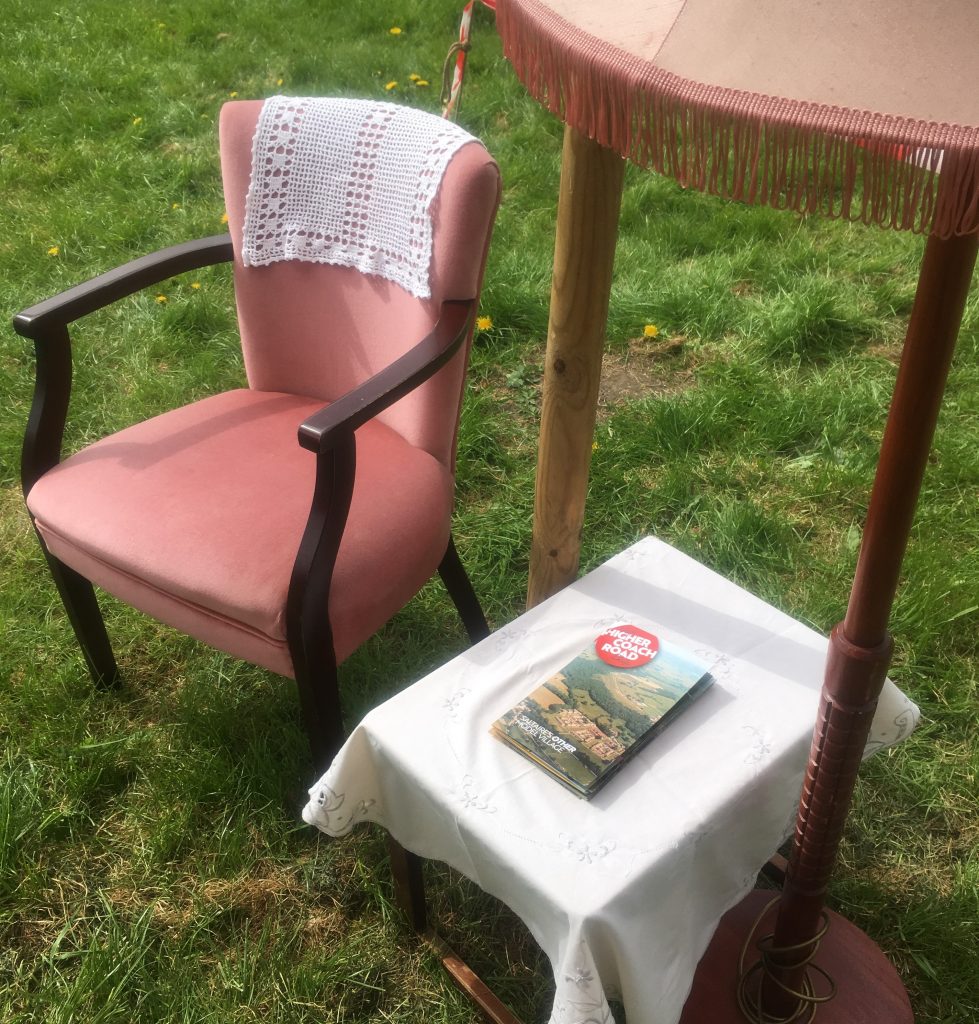 Visitors to our Airedale Home also had the opportunity to pick up our brand new leaflet about the Higher Coach Road estate (the cover of which is featured at the top of this page). This too was a collaboration between MSW and HCRRG: the leaflet was conceived as a piece of “alternative heritage literature”, identifying Higher Coach Road as “Saltaire’s Other Model Village” — a claim justified by the accompanying text. You can download a PDF of our Visit Higher Coach Road here. 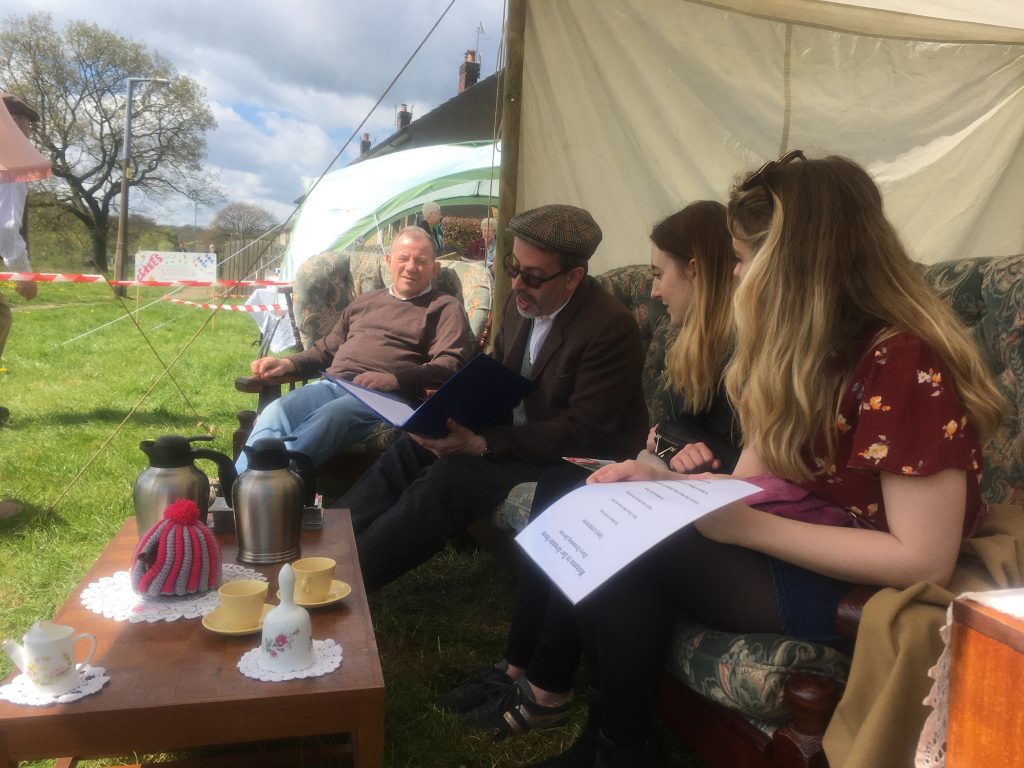 Also “on the menu” in the living room was storytelling. Steve (me, above in the flat cap) had selected a number of tales of the Higher Coach Road estate and the wider Aire valley — gathered from research and carefully rewritten as “fireside tales”. Guests could select from an a la carte menu featuring seven story titles… I’m pleased to say they went down very well. Tales that were requested multiple times from this “Story Streaming Service” included “Ten Minutes of Madness: The Derwent Avenue Murderer” (another version of this story also appears on track 14 of our audio tour of the area, Salt’s Waters), and “Billy’s Story (Back from the War)”, which told the tale of the late Billy Glover, who had lived yards away from here, on Troutbeck Avenue, ever since the estate was built. (Tony, on the left in the picture above, knew Billy well and was moved to hear the story of his move to Shipley after World War II.) 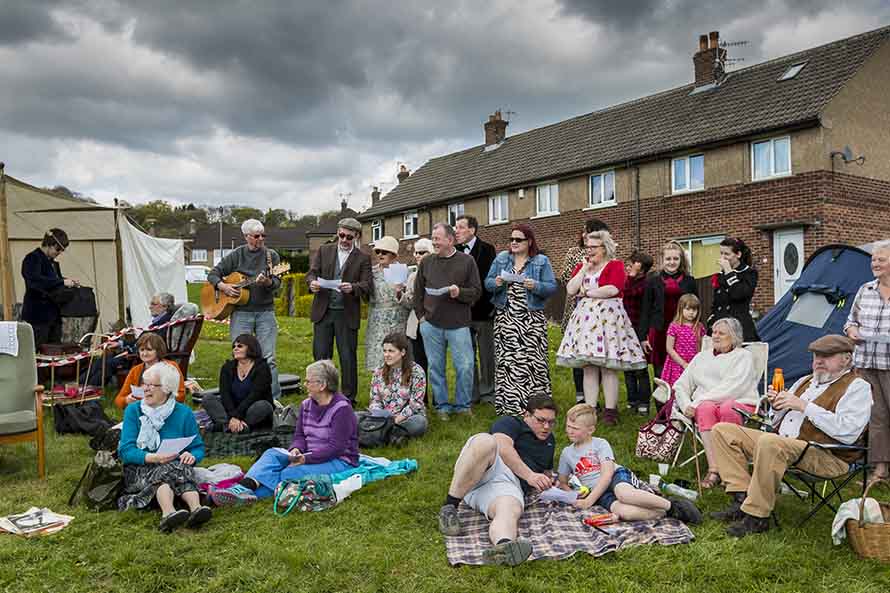 The picnic eventually wrapped up with a sing-along led by Eddie, in which everyone still present joined in the chorus of “Welcome to Our Airedale Home”. Here the song’s key sentiment (“there’s allus a welcome around — if — you leave the place as you found it”) was deployed as part of the ongoing protest over plans to redevelop the nearby Milner Farm (see this blog post for details).

You can also read a blog account of this 2017 contribution to World Heritage Weekend — posted immediately after the event — just here.

And our Visit Higher Coach Road leaflet can be downloaded in PDF form here. 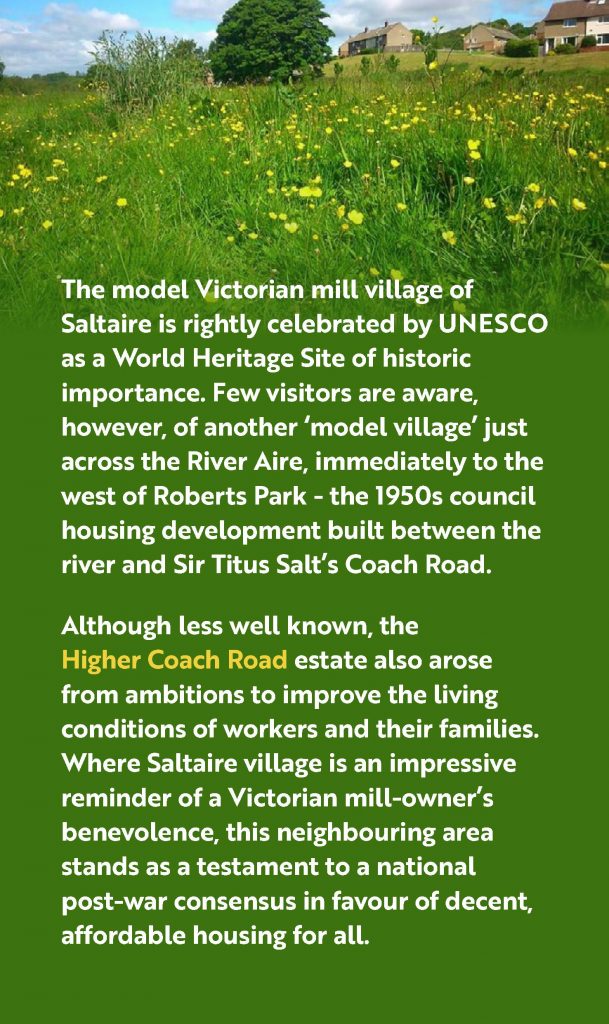 Huge thanks to everyone involved in putting these events together.