After the Flood was a site-specific promenade performance devised for the 2016 Leeds Waterfront Festival.

The piece was a direct response to the Boxing Day floods that had seriously affected Leeds and the wider Aire valley the previous Christmas, but unlike its subsequent companion piece Too Much of Water, it did not focus primarily on stories of those affected by the flooding. Instead, the objective here – after the flood – was to think about what can be done, or is being done, to alleviate future flood risk.

It thus drew, as source material, on interviews with professionals in the water engineering sector (including representatives of the Environment Agency, Leeds City Council, ARUP, Yorkshire Water, etc.), as well as with local people involved with the flood clean-up after Boxing Day.

The objective of the piece was to communicate some tricky ideas in as entertaining and accessible a way as possible to festival-goers (including families with children). 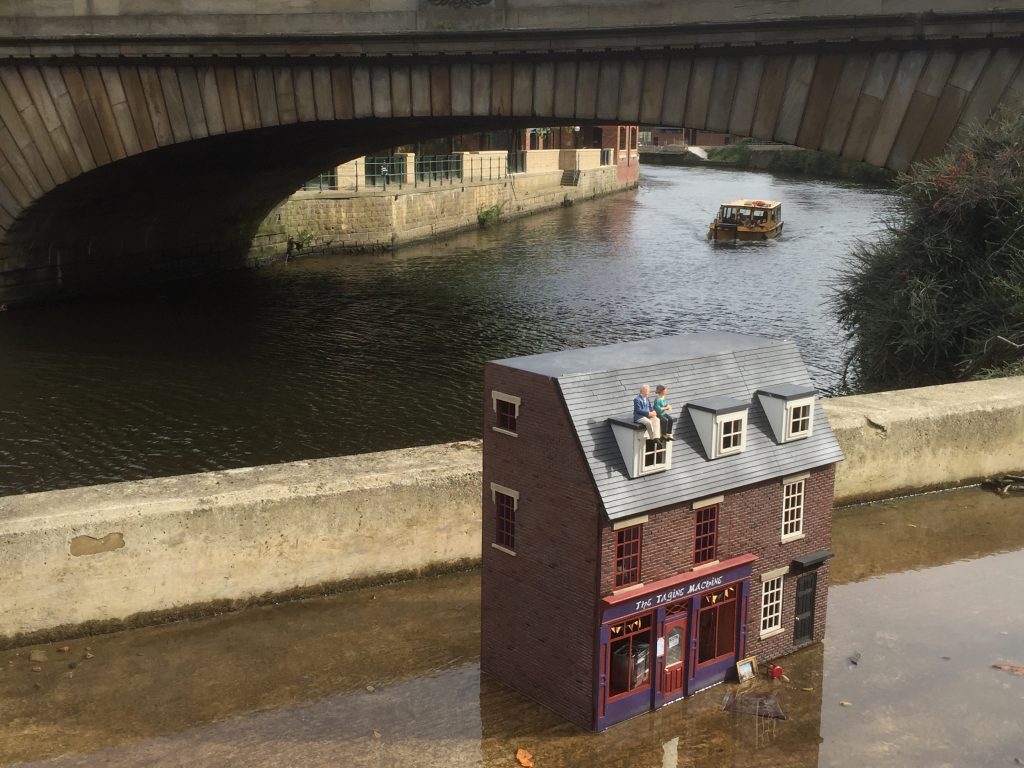 Please note: owing to an unfortunate lack of documentation over the Waterfront Festival weekend, most of the images below were taken in September 2016, when After the Flood was remounted for one day only, at the request of colleagues at the Environment Agency (so that more of them could see it). This explains the curious absence of crowds in the pictures, as this was a regular working Wednesday.

On the same day, we shot a film version of the piece, which was subsequently exhibited as part of the Flood Response exhibition which ran at Leeds Industrial Museum from December 2016 for six months. You can also view it online here. 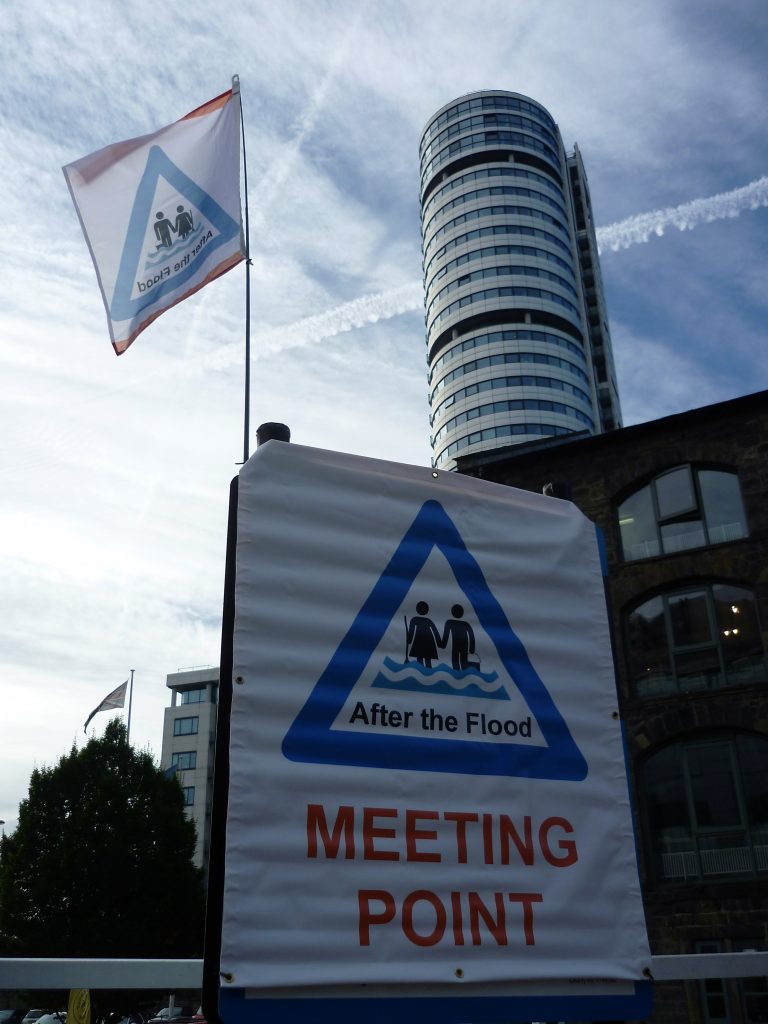 After the Flood was designed to maximise potential audience participation during the two days of the Leeds Waterfront Festival, by enabling passers-by to begin viewing the piece any time between 12 and 4pm on both days. Actors were positioned at six “stations” along a looping walk-route, and would perform a short scene for audience members when they came past (i.e. each actor performed the same scene over and over again for new groups). 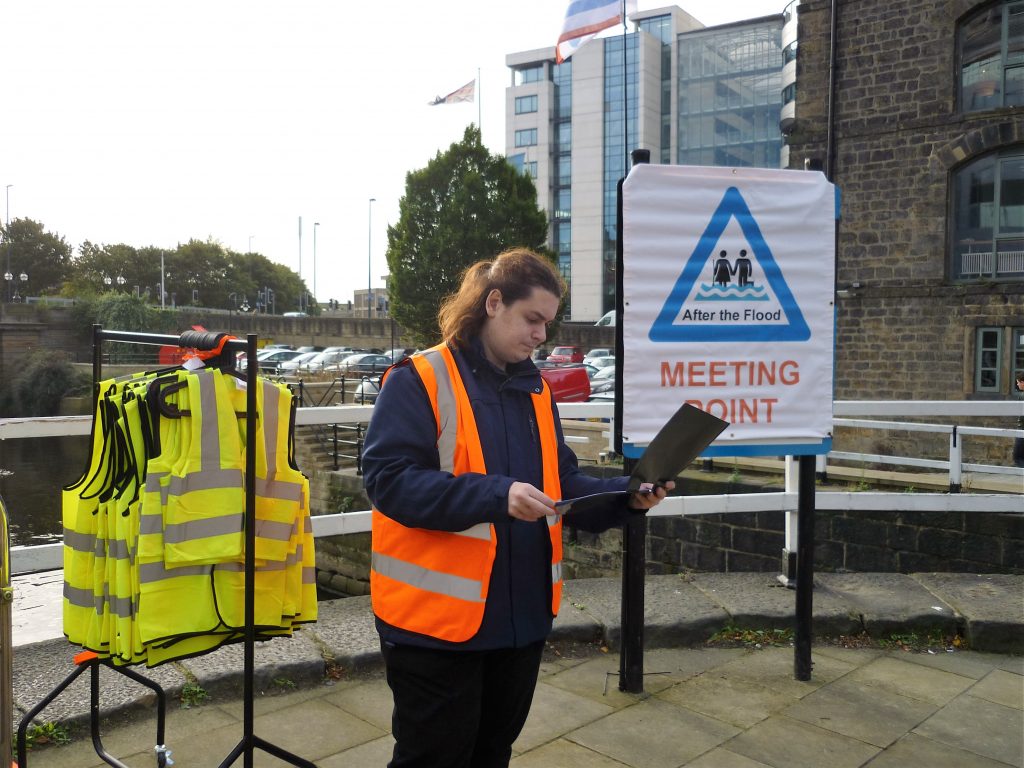 Station 1 was the gathering place and starting point. Here, at the junction of the River Aire and the Leeds-Liverpool Canal (we cannibalised Canal and River Trust signage by hanging our own designs over it), interested passers-by were gathered into groups of up to half-a-dozen, and then addressed by actor Pete Freeth (above), in role as a volunteer flood response co-ordinator. Spectators were addressed as if they had turned up to participate in a clean-up, and invited to wear one of our hi-viz vests (just as they might in a real clean-up). The vests, which came in all sizes (including for small children, who loved them!), enabled our groups to be easily identifiable en route by the actors greeting them at the different stations.

Pete’s short speech to the “volunteers” thanked them for agreeing to participate, and set them off on their way. Although Pete’s character (like all our characters) was fictional, his story drew on material from a research interview with Phil Marken, of Open Source Arts, which had been a community hub for the voluntary flood response effort in Kirkstall — the area of Leeds worst hit by the flooding on Boxing Day. 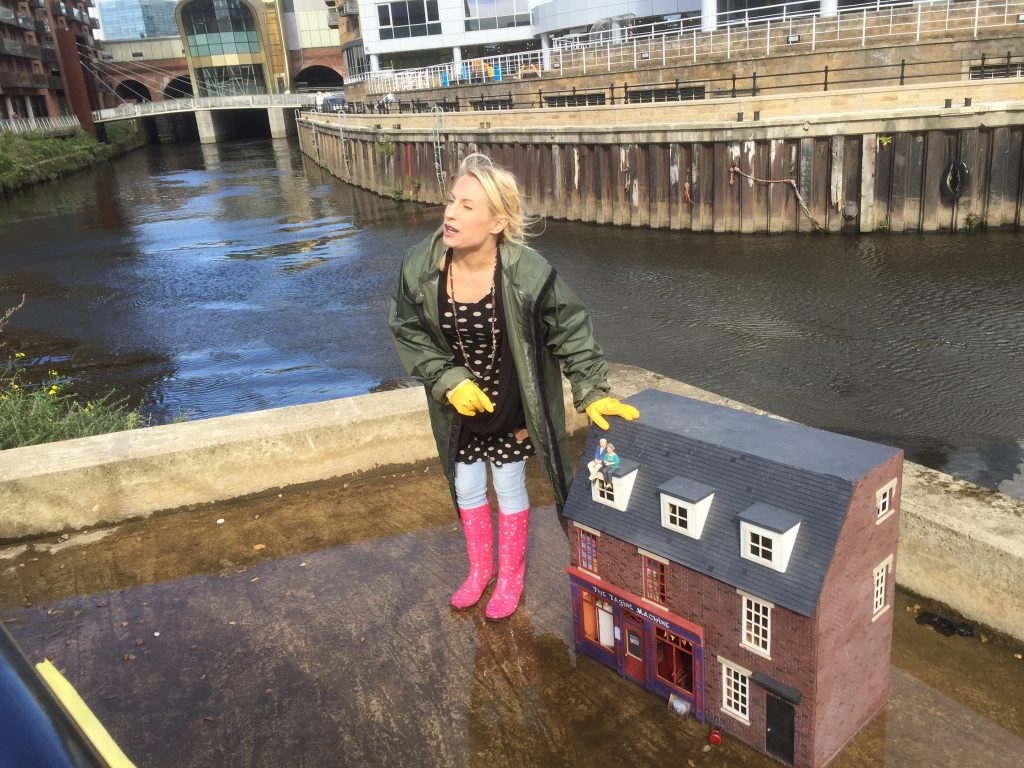 Station 2: Our “volunteer” audience groups were sent by Pete to “help out” at the Tagine Machine, a restaurant business on Kirkstall Road badly hit by the flood. There is, in fact, no such place — the Tagine Machine was a fictional amalgamation of several businesses in the area — but the story of the restaurant enabled us to highlight the real human impact of flooding even in a primarily non-residential context like Kirkstall Road. 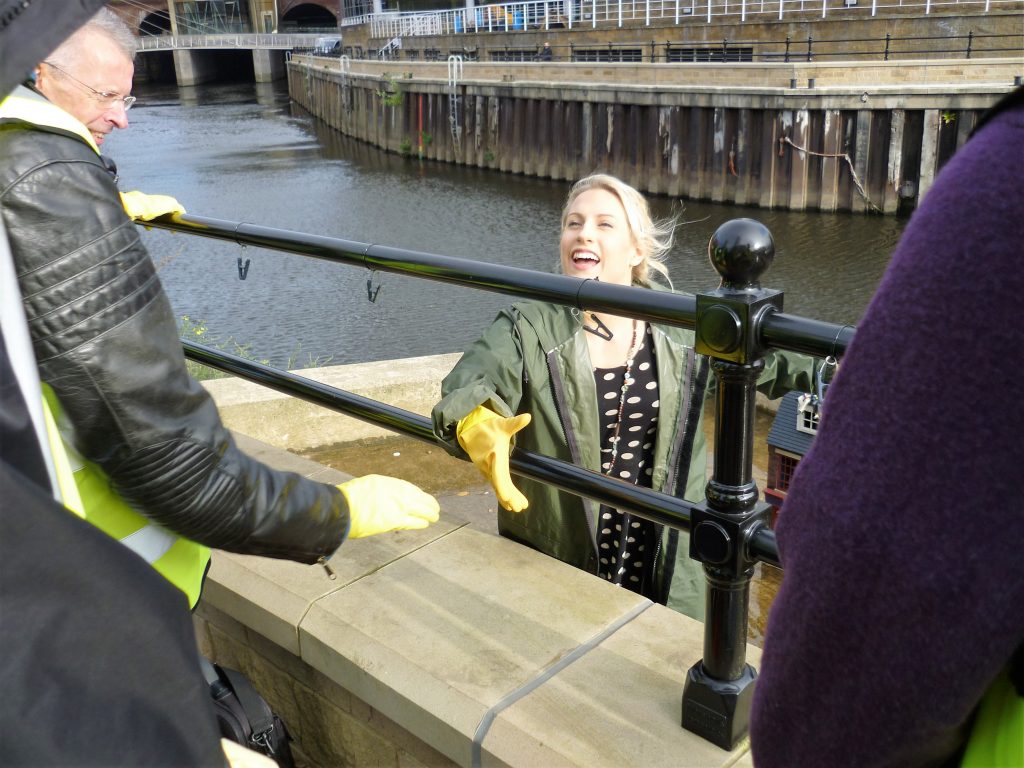 “Poppy” (played by Kat Martin) would welcome spectators to “Kirkstall” — even though they were, of course, overlooking the River Aire in the city centre, near Victoria Bridge. 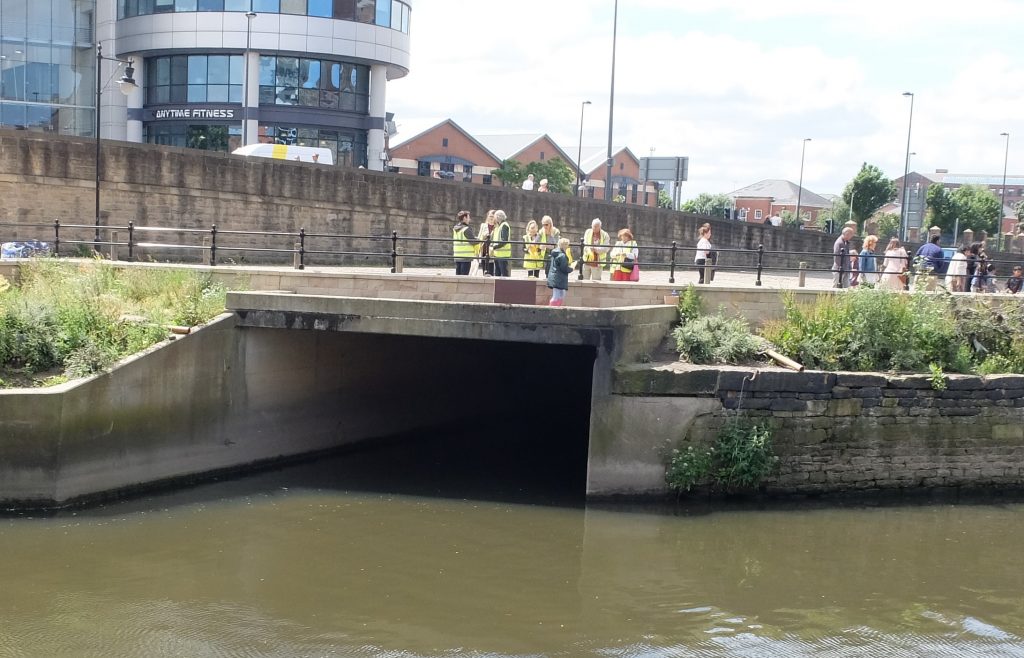 Kat was positioned on the “wrong” side of a riverside railing, on the roof of the concrete tunnel which provides the outflow of the Holbeck into the Aire. This area (apparently built as a plant-bedding area, never utilised) allowed us to “flood” the floor around the doll’s house representing our restaurant… 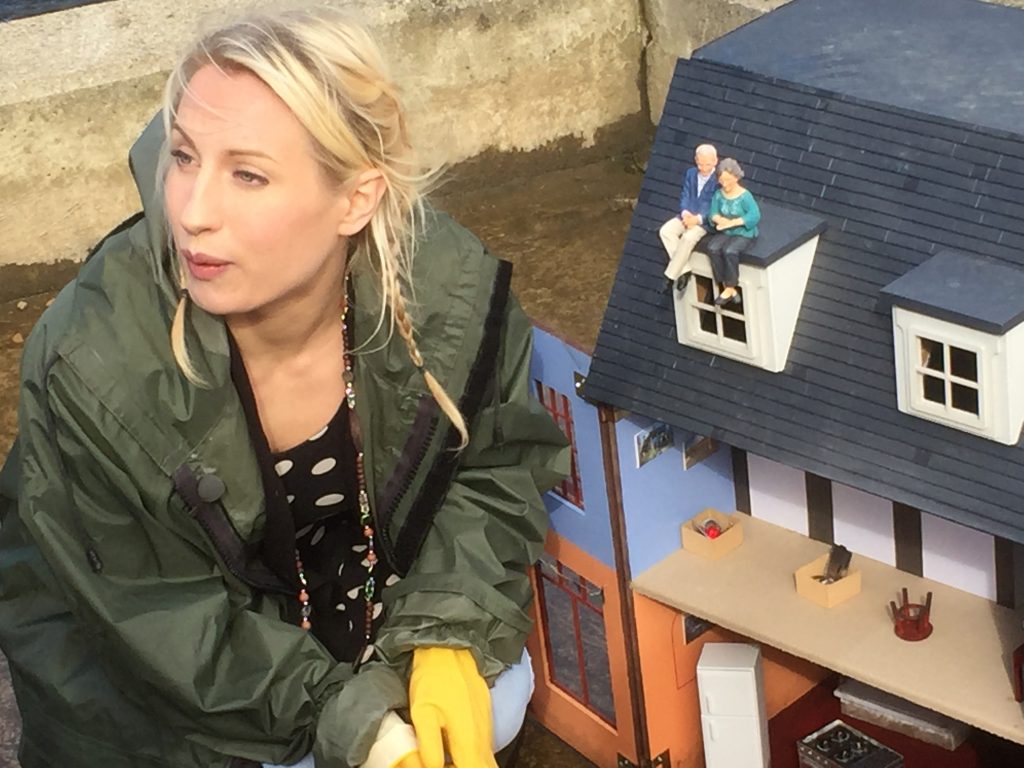 “Poppy” would introduce spectators to her parents — the two tiny figures perched on the roof of the Tagine Machine. She’d describe how opening this Moroccan-themed restaurant had been the culmination of a life-long dream of theirs — now decimated by the flood. Spectators, having donned marigold gloves to help with the clean-up, would pass tiny, flood-damaged items along from hand to hand until they reached our “skip”. Each item (a painting, a rug, etc.) held personal resonances for Poppy and her family. 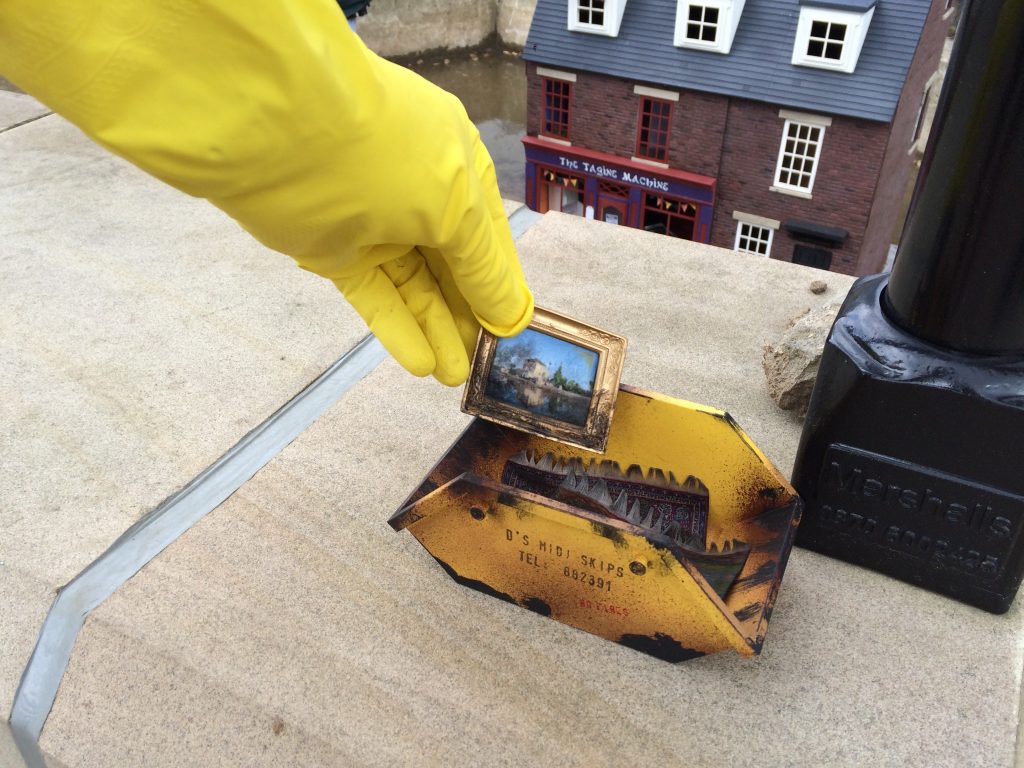 This miniaturised approach to  storytelling (inspired in part by cast member Matthew Bellwood’s previous work in this vein) was designed to invite spectators to “fill in the gaps” between representation and reality, by using their imaginations and projecting their own emotional responses to the narrative.

Station 3: At the end of her story, Poppy would invite her volunteer helpers to assist her out further by going along to a briefing on Leeds’ new flood defences, and finding out what was being done to stop a repeat of the Boxing Day flood… Having crossed the river by Victoria Bridge, spectators came down the riverside path directly across from Poppy’s station, where they were greeted by Trevor and Bruce (played by Nicholas DeJong and Joe Large). 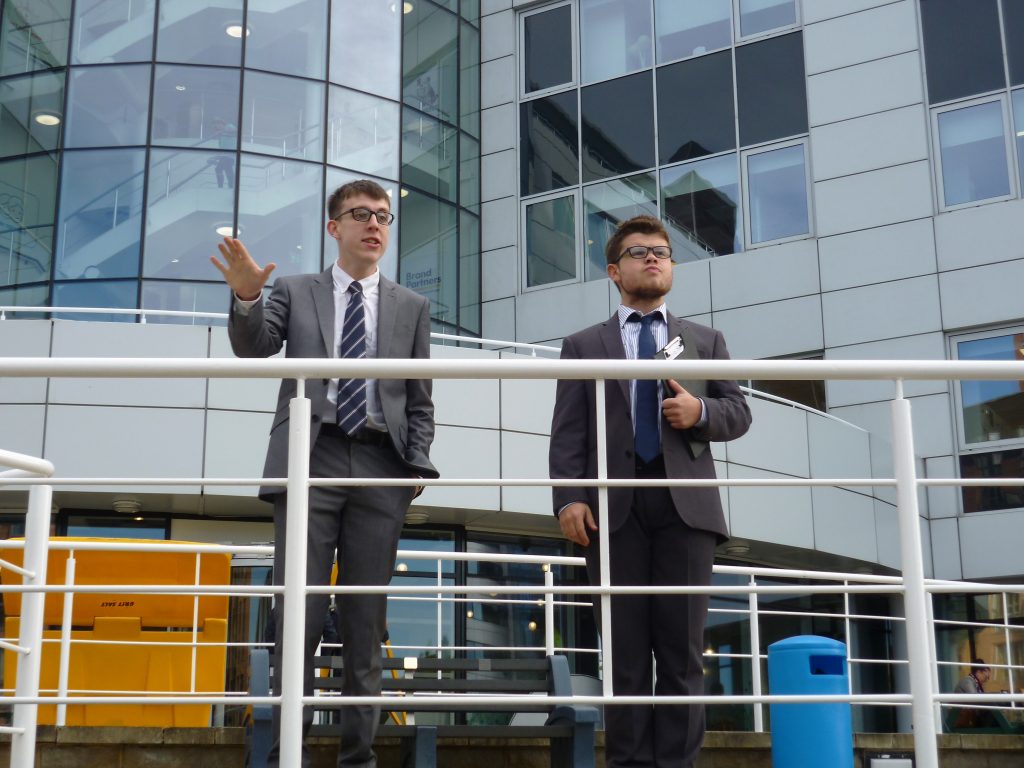 Trevor and Bruce are water engineers — or, in their own imaginations, “hydro heroes”! After the emotional seriousness of Poppy’s story, this scene was written by contrast as a light-hearted, comedic double-act. They also bring the narrative from Kirkstall into the city centre — describing the impact of the flood on the Direct Line building (directly behind and beneath them). Yet, pointing back across the river towards Poppy’s position, they point out the way that brand new flood walls have been constructed atop the old stone walls, as part of the new Leeds Flood Alleviation Scheme (FAS). These walls, they note, kept that side of the river from being breached on Boxing Day… 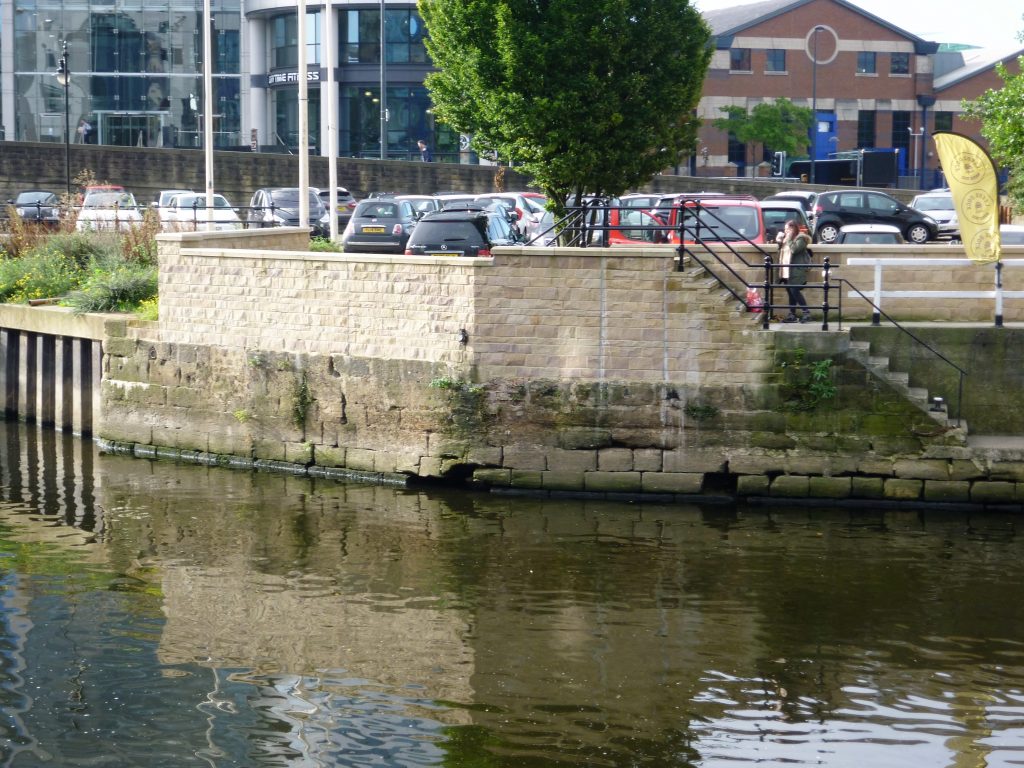 Trevor and Bruce then go ahead and describe the more technically exciting part of the new flood alleviation scheme — the collapsible weirs which still being installed at Crown Point and Knostrop. Their demo, involving a clipboard (as the weir mechanism) and a balloon (as the collapsible air bladder inside it) was deliberately comical and lo-tech, but it directly inspired the idea for Weir Science — a much more elaborate performance demonstration at the 2017 Waterfront Festival, when the FAS was nearing completion. 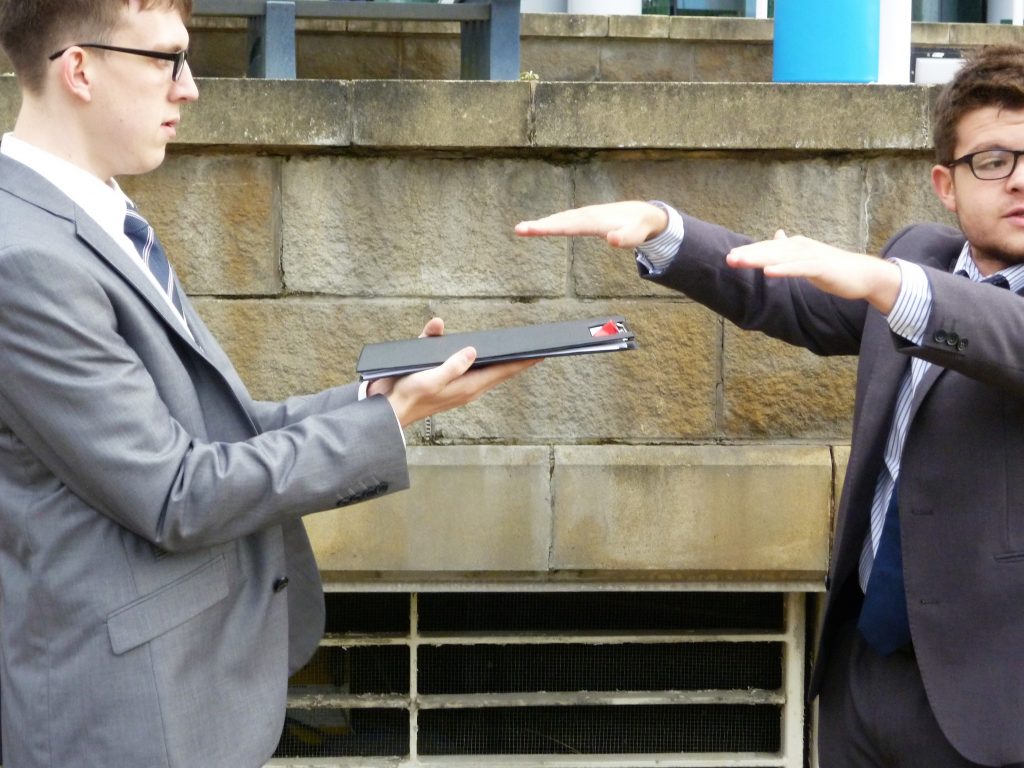 Station 4: Moving on from the Direct Line building (visible mid-shot in the picture below), spectators would cross over Waterman’s Bridge and be guided into the brand new South Entrance of Leeds Station (itself completed since Christmas). Here, in an atrium-like space overlooking the river, we meet ‘The Gardener’ — who queries the technological obsession with the steel, glass and concrete that surround us in the city… 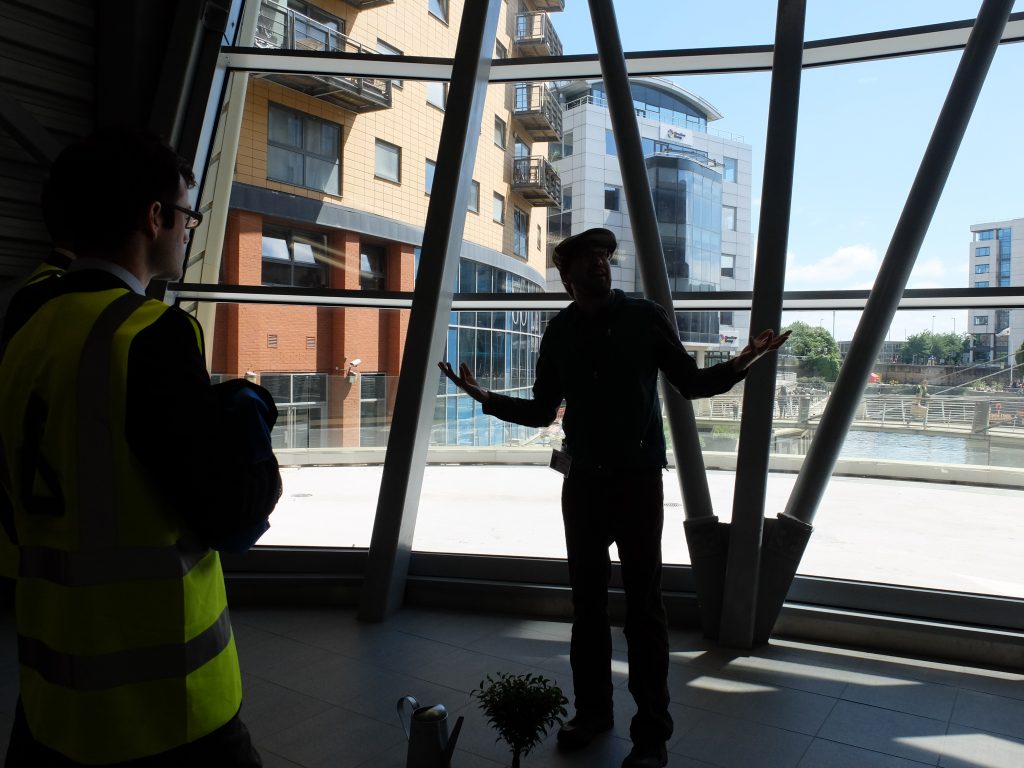 Played by Matthew Bellwood, the Gardener gently asks where he can plant a small tree he is carrying… drawing attention to the lack of visible green space in this hi-tech urban landscape. More trees, plants and earth, he suggests, might also provide more porous places for water to go — instead of draining straight off into the river, thus adding to flood risk. (His watering can demonstration of this point was a particular hit with younger participants.) 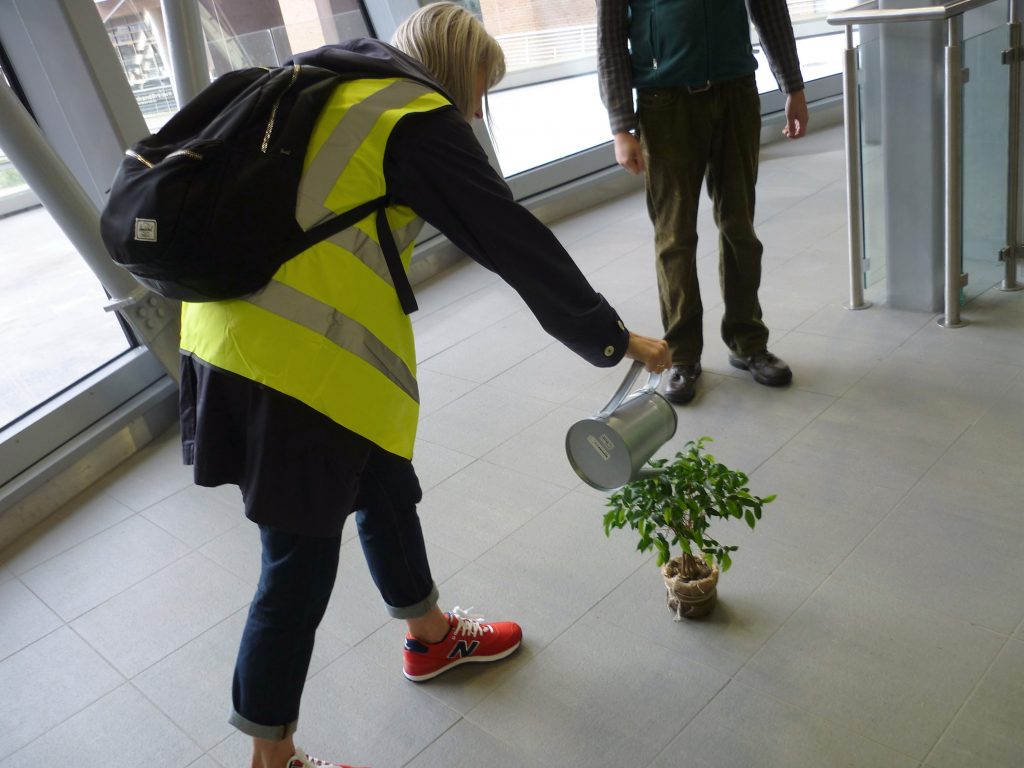 Indulging in a little time travel, the Gardener (who implies that he is something of a Time Lord, like ‘the Doctor’) suggests that really reducing flood risk might entail going back in time and redesigning the city… He then takes us back through the station, and back through time, from 21st Century architecture into the Victorian ‘Dark Arches’ — which support the superstructure of the station, as it sits right across the river. 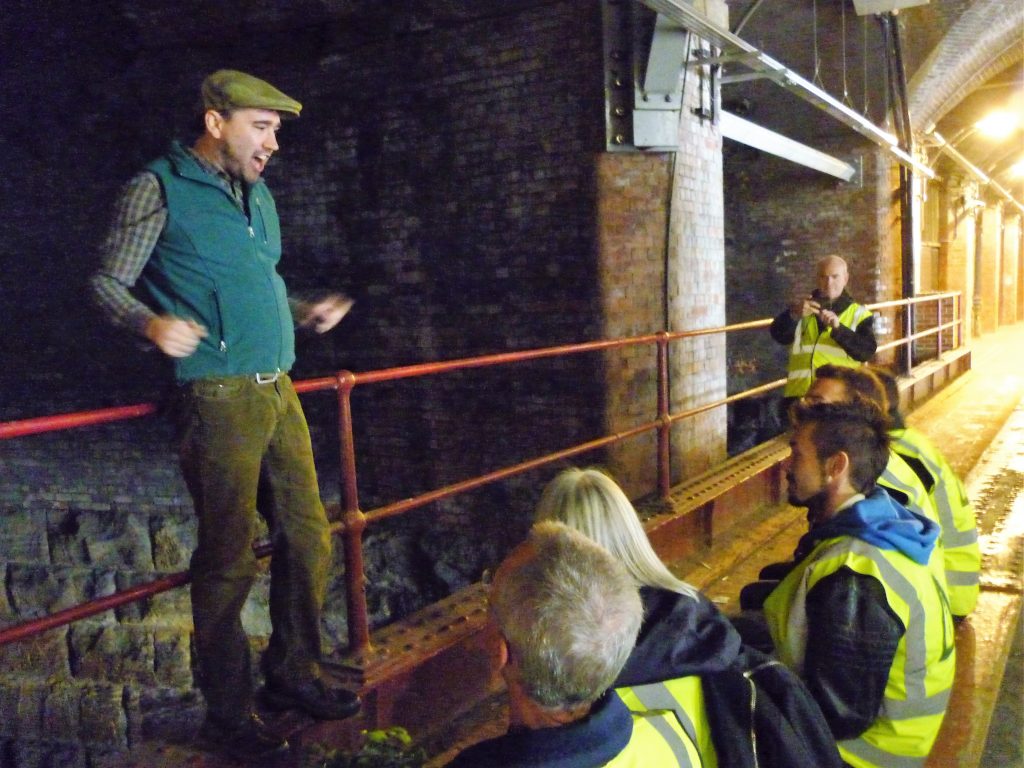 Gesturing upstream, to the light at the end of the tunnel, the Gardener invites us to imagine the upstream catchment of the Aire — and the network of streams and becks flowing into it. What if more water could be stored or held in the upper reaches of the catchment, so that less of it flows down to the city during high rainfall periods? He introduces us, briefly and vividly, to ‘natural flood management’… ‘soft engineering’… Cheaper alternatives to costly schemes of steel and concrete. 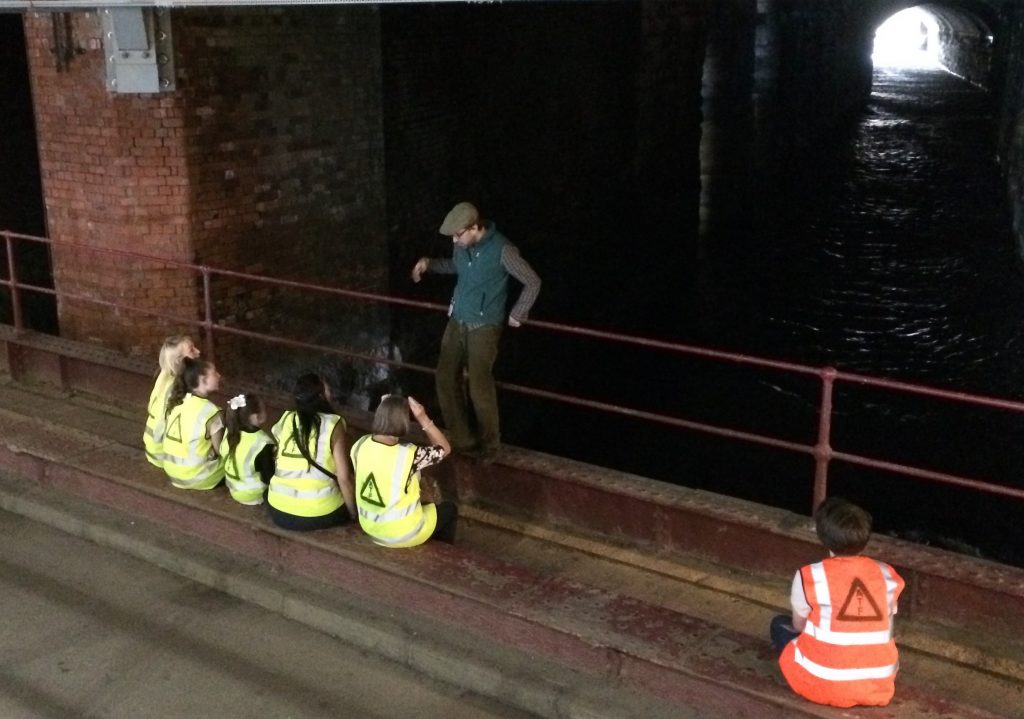 Station 5: From the Dark Arches, spectators would be directed back out in the main plaza of Granary Wharf, a redeveloped canal dock area that serves as a hub for the Waterfront Festival. Here they encounter a juggler… an appropriate performer for this context, except that this one is dressed in a shirt and tie. Jake England-Johns is the anonymous ‘Agency Man’, who attempts to reflect on what audiences have heard from the previous performers by showing how tricky it is to juggle the pressures and expectations placed on authorities such as, maybe, well, the Environment Agency… 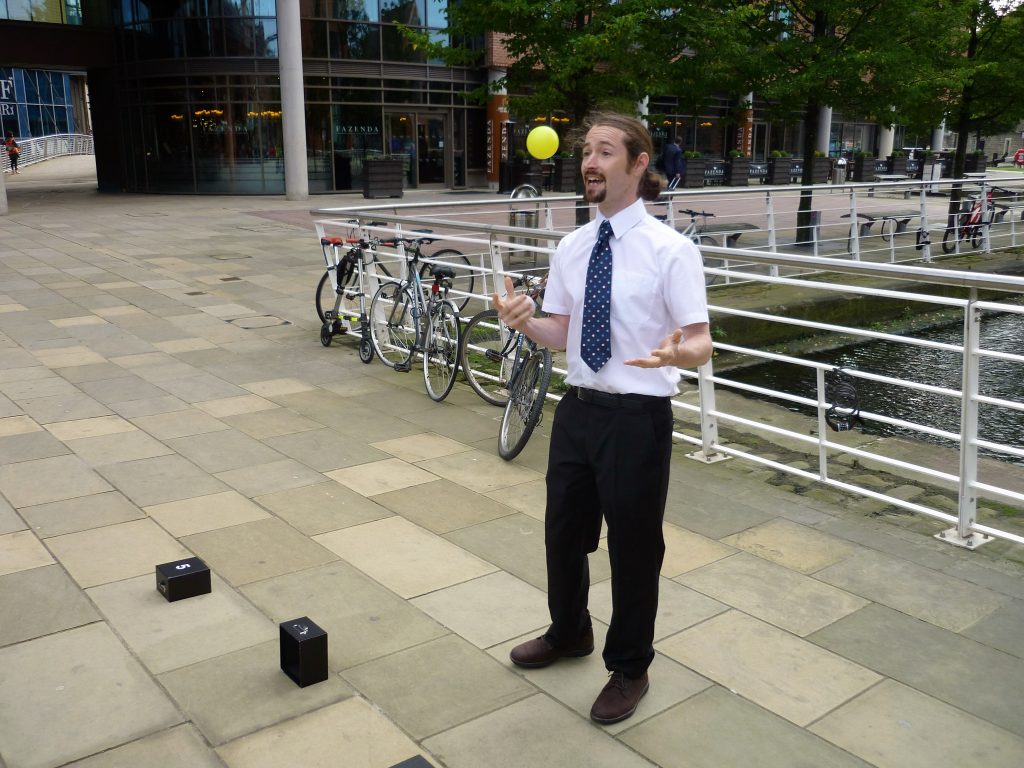 Jake enlists the help of his audience in adding new balls to the juggling mix, each representing a new complication in planning for flood schemes… before eventually he proves unable to keep them all in the air at once. He thanks spectators for their aid in his failing, and asks them — next time — to think before they leap to criticism… 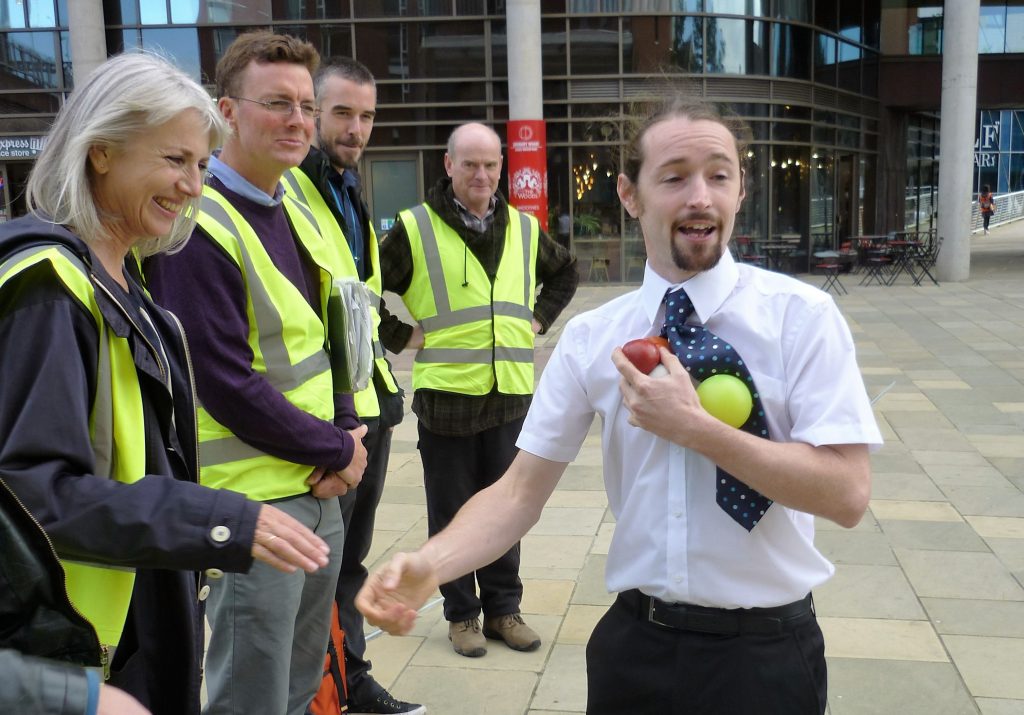 Station 6: After a last short walk, further across the Granary Wharf plaza, we come to the edge of the canal (just yards from Station 1, where this circular loop began). Here we are greeted by “Linda” — Poppy’s now full-size mother (played by Libby Wattis), who invites us on board a bunting-adorned canal boat for a drink and a sit-down… 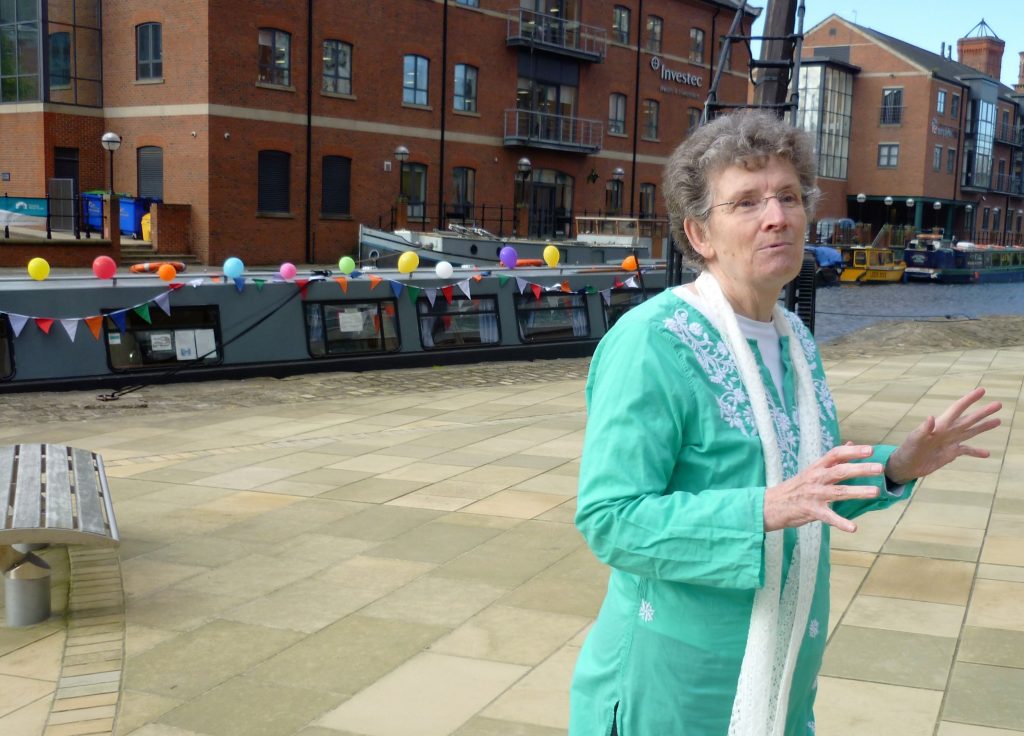 It’s been a long six months since the flood decimated their livelihood, Linda tells us, and she shares some details about the inundation of paperwork that followed the flood itself. Still, she notes, it’s wonderful to see people out on the waterfront today for more festive reasons. It reminds her of the big party they had down in Kirkstall recently, to thank the flood clean-up volunteers… and she wants to thank us, today’s volunteers… 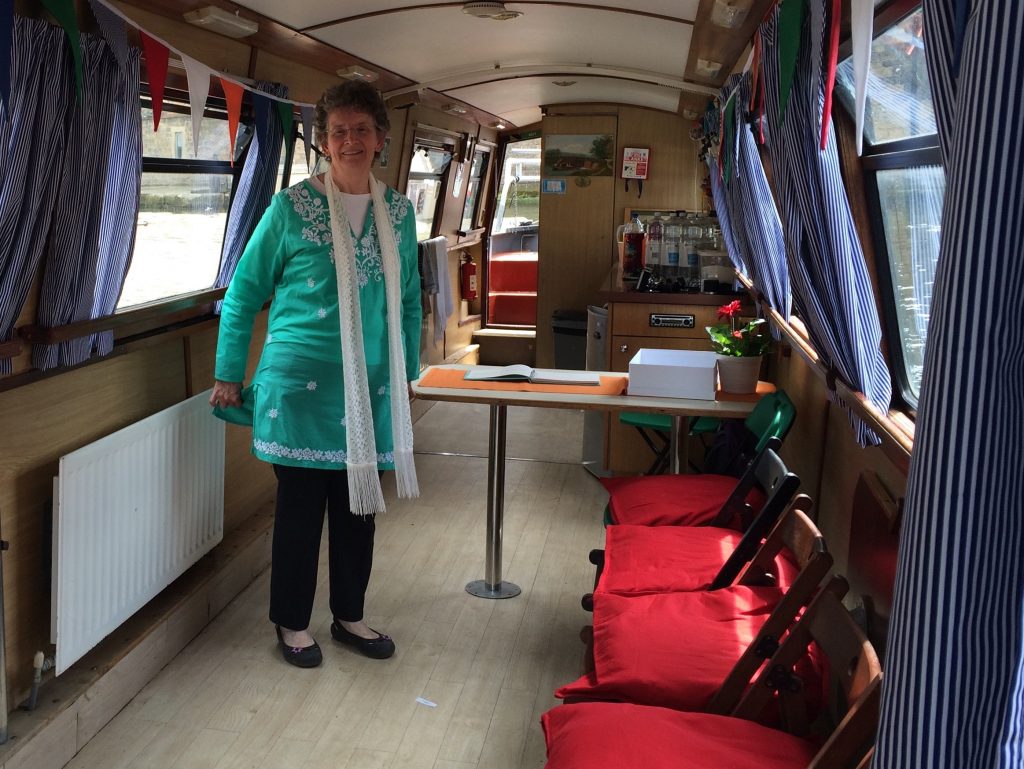 … she also invites us, finally, to share any feedback we might have in the Visitor’s Book on the table, before we leave to enjoy the rest of the Festival. 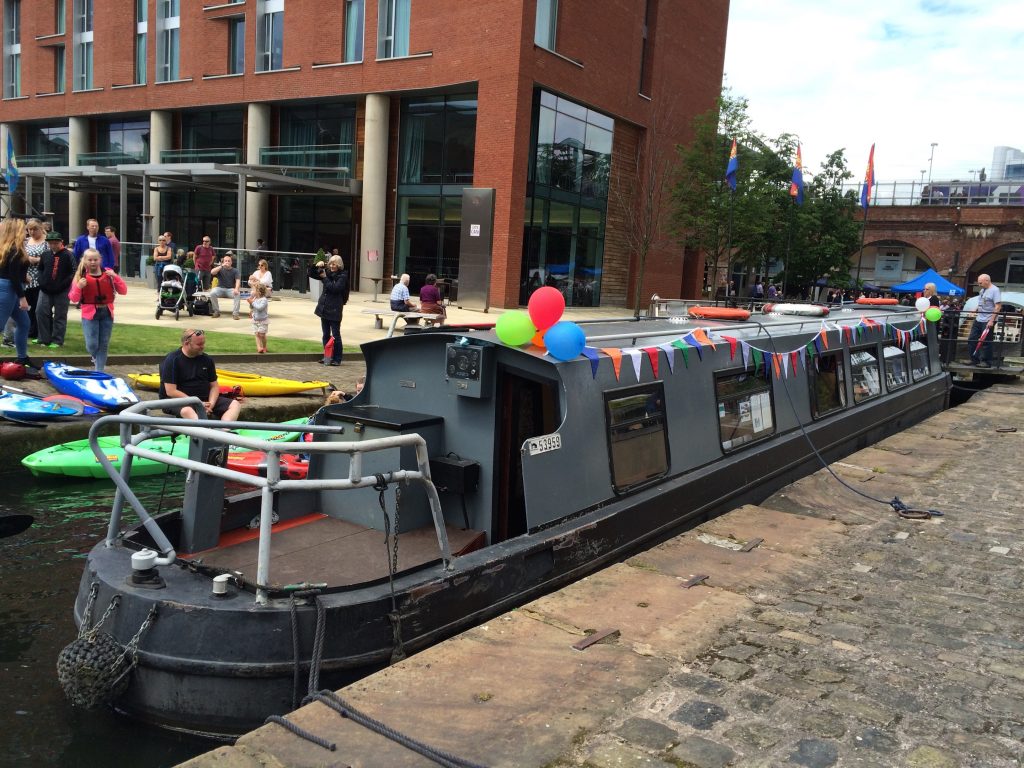 Here’s Linda’s boat — kindly loaned to us by Canal Connections — in a rare photo from the Waterfront weekend itself, moored in one of the Granary Wharf dock spaces…

And here are some pages from our Visitors’ Book, showing feedback from young and old… 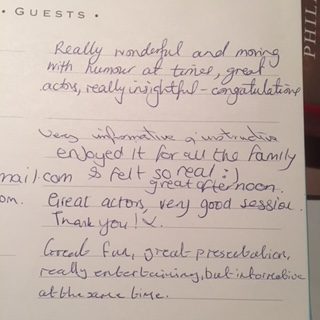 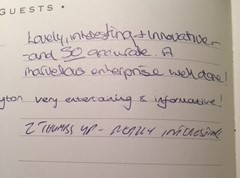 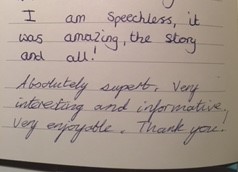 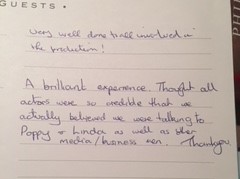 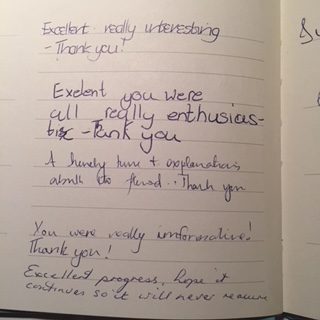 After the Flood was co-produced by Multi-Story Water and Common Chorus Theatre,   in association with Leeds Waterfront Festival.

Conceived and written by Steve Bottoms and Simon Brewis

With thanks to Antoinette, Hannah, Matthew and Matt Rogers for their devising input.

Special thanks to Trevor Roberts and Sue Jennings at Canal Connections.