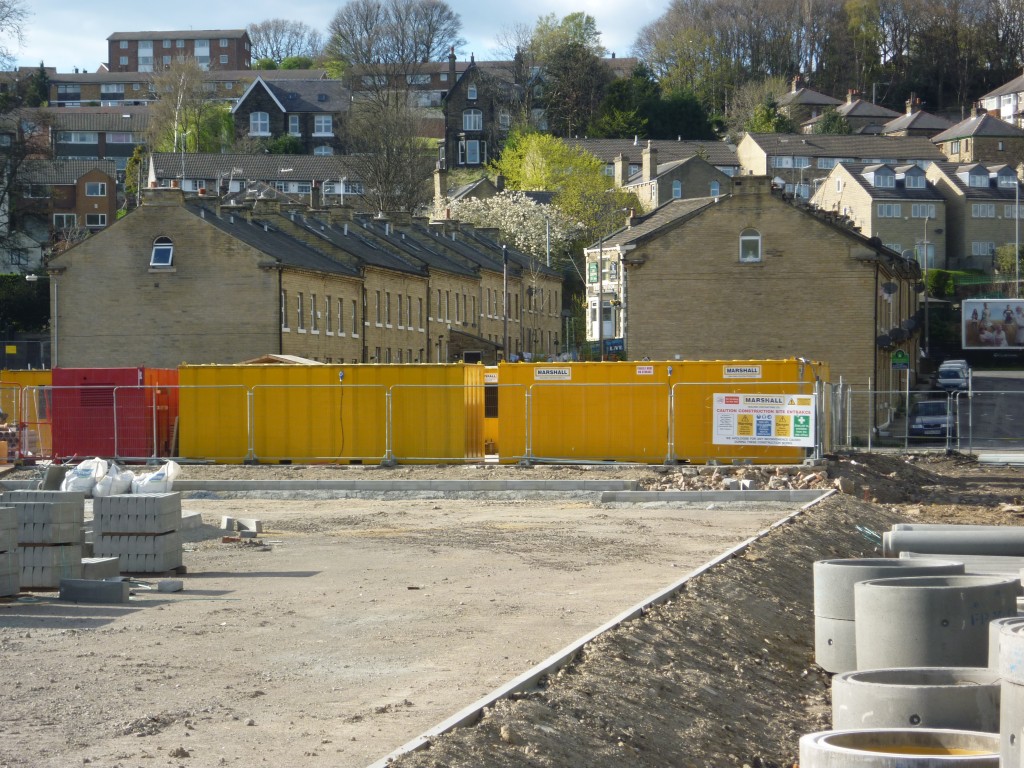 This is Lower Holme: a twin row of mill houses (their back doors opening onto a shared alleyway), located in Lower Baildon, on the north side of the Aire and just to the east of Baildon Bridge. It has featured on this blog a few times before (see “Lower Holme” in Category listings), and indeed in our 2012-13 performance tours, because the residents have been suffering for years from neglect and disinterest on the part of relevant authorities… Until this spring, however, you would never have had this clear view of the gable ends, because there was a vacant and increasingly derelict mill building standing across the bottom of the street. 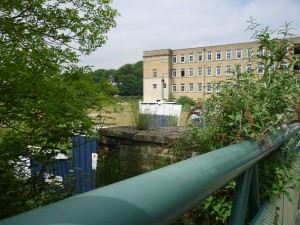 Here’s the old building, in a photo taken last year from the footbridge over the Aire. As an unadopted road, Bradford Council would take no responsibility for Lower Holme, on the grounds that the road belongs to the mill site owners and is “private” property. This despite it also being a public right of way, that leads to this footbridge across to Dock Field. 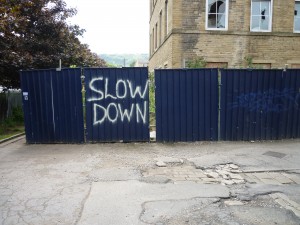 This view is from the bottom of the row of houses, looking towards the river. This hideous blue fence had been left up around the whole site by the developers – Mandale – who demolished the other mill buildings several years ago, but abandoned their building plans when the economy tanked in 2008.  The fence was left as a long-term eyesore for residents, and encouraged abuse of the area by bored local youths…

This is a similar view down towards the river, taken this week…  What a difference it makes just to have clear fencing, instead of corrugated metal! 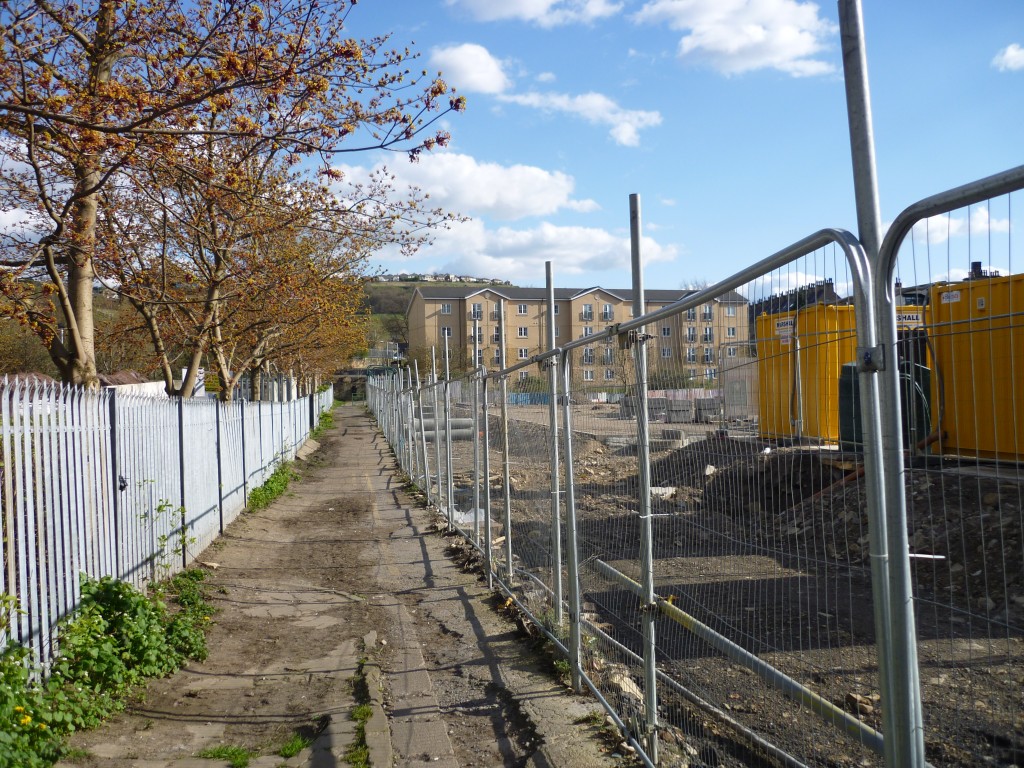 The last mill building was recently demolished by new developers, Marshalls, who bought the mill site from Mandale and plan to build a Wickes and a KFC on the site. This area between the houses and the river will be largely car-parking, however, so the residents will (we hope) continue to enjoy a much clearer view down to and across the river, even when the build is finished. The commercial buildings themselves will go up on the adjacent site to the right in this picture — again newly exposed by clear fencing! 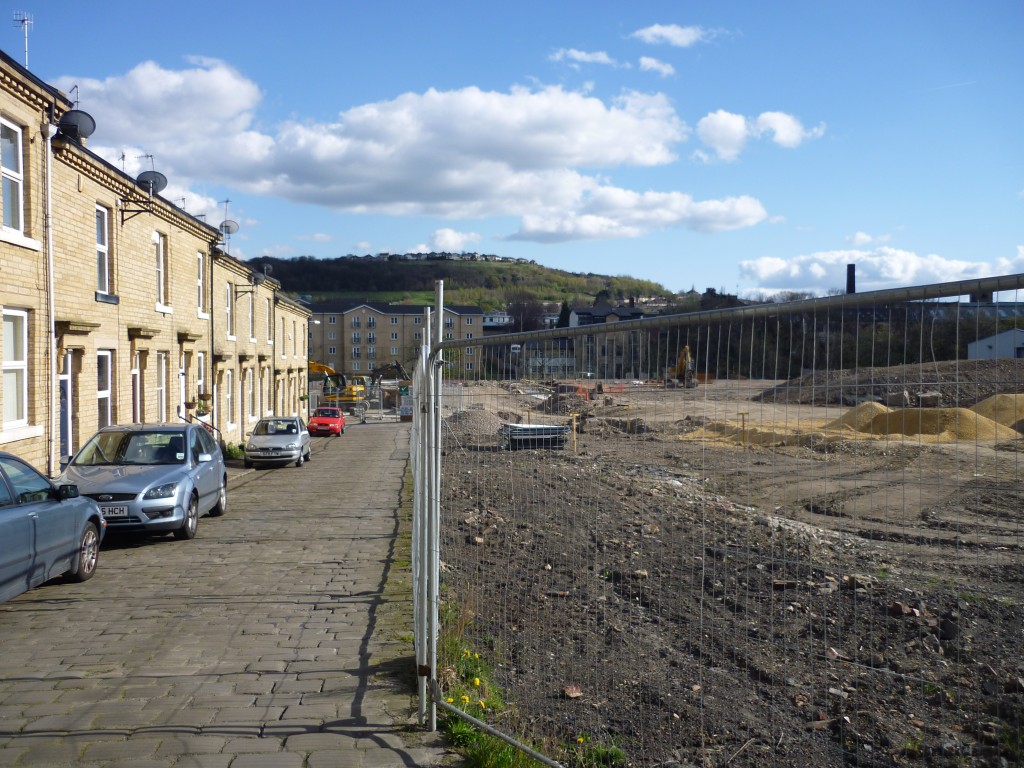 Recently, I was sent this poem by Lower Holme resident Lynda Callaghan, who has generously allowed me to share it here. It was written back in early 2008, after the metal fencing first went up, initially to shield the houses from the first round of demolition (on the patch to the right above). Lynda says she’ll probably have to write another poem now, to commemmorate this year’s changes, but this one speaks volumes… 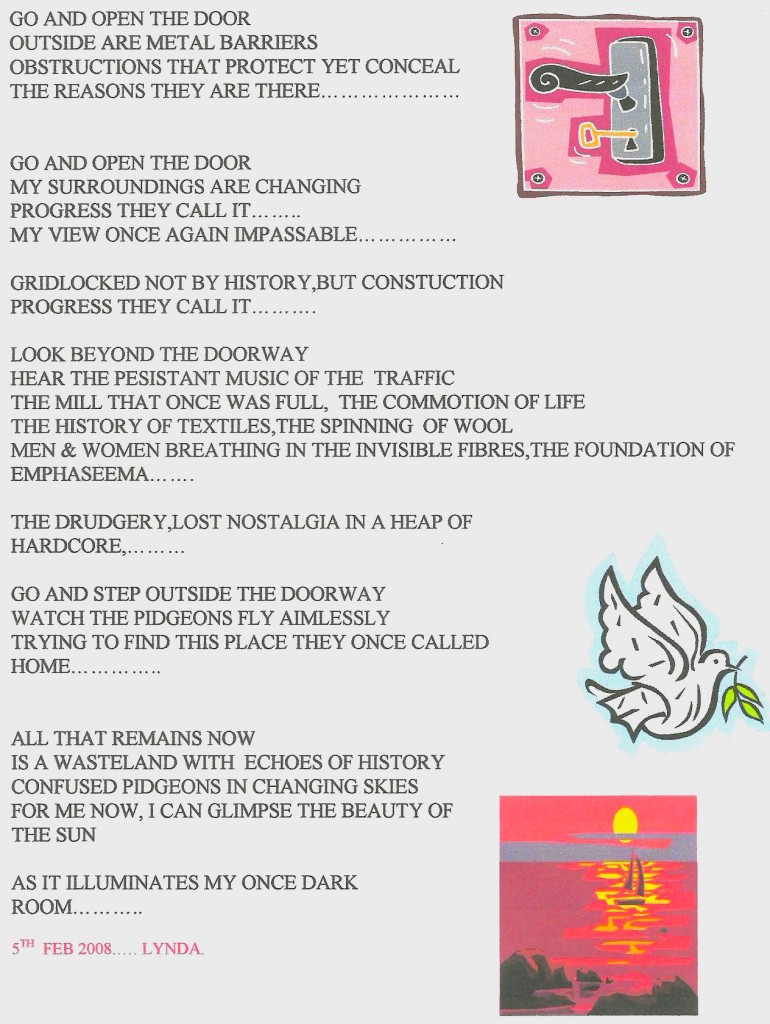 Lynda has even more sunlight now, of course, with the demolition of the last building. Although the site, of course, remains a wasteland for the time being… Marshalls say that the build will be completed by the autumn of this year – somewhat later than initially planned. Apparently the delay has been partly caused by the need to shore up the ground nearest the river, to comply with environmental and flood risk advice… You can see the earthworks here: 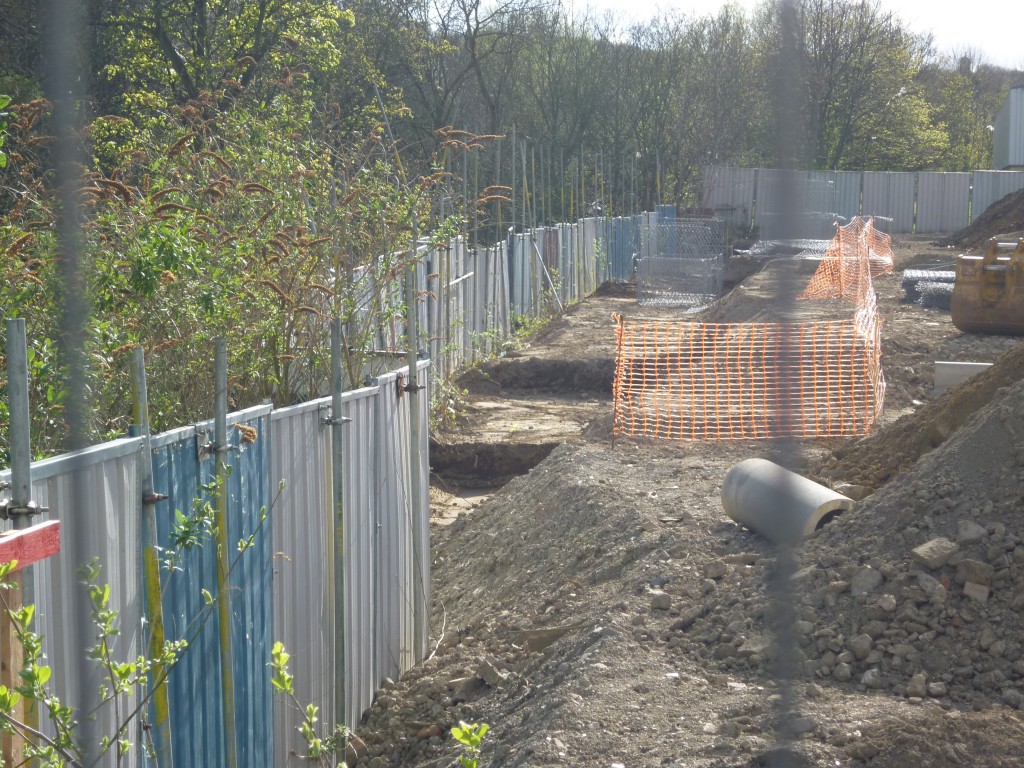 Note that along this river side of the site, the Mandale fencing has been retained for the time being, perhaps to prevent rubble falling through onto the riverside footpath? 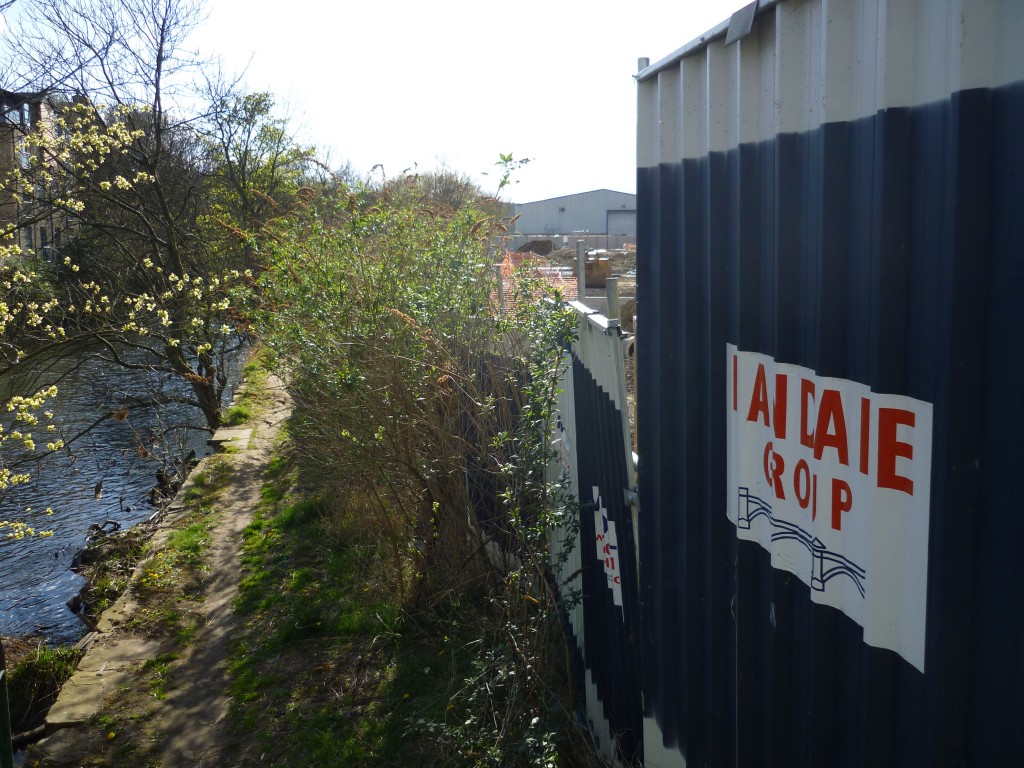 Of course, the condition of this footpath continues to be very poor and difficult to navigate (it featured as the most “rugged” section of our performance tours in 2012-13). Despite being an ancient right of way, protected by law for public access, this path epitomises the continuing neglect of places that don’t present obvious commercial value to authorities and developers. Marshalls will not, of course, be taking responsibility for it — though to give them their credit, they have offered to resurface the broken road surfaces of Lower Holme, even along the stretch that they don’t technically own (apparently it belongs to the houses themselves now – like “riparian” ownership of a river – but the residents are hardly in a position to lay tarmac for themselves!). It does seem, then, that even though Wickes and KFC are not exactly what most people would choose to live next door to,  the new developments are – at long last – bringing some good news to the long-suffering, riverside residents of Lower Holme.