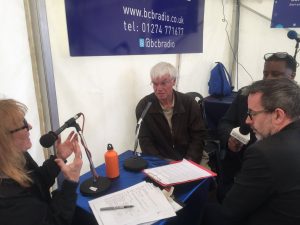 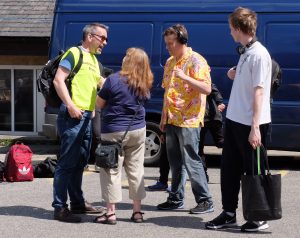 Representatives of our Multi-Story Water project have appeared on local radio on several occasions. For instance, we got to know Bradford Community Broadcasting (BCB) pretty well: station director Mary Dowson was a fan of our very first shows in 2012, and followed up with us on several occasions in subsequent years (see pictures). There were also several appearances on BBC Radio Leeds, including the two interviews with lead researcher, Steve Bottoms, which are reproduced below.

The interview above, from September 2017, was recorded in the BBC studios in Leeds and went out on the Paul Hudson Weather Show (syndicated to all the BBC’s Yorkshire radio stations). The interview below, from August 2016, was recorded on board a canal boat heading towards Saltaire, for Richard Stead’s morning show. This was recorded immediately after we finished shooting footage for our short film High Rise Damp (see the canal boat at the end of the film – Richard Stead is just about visible helping with the lock gate). The boat belongs to our colleagues at Canal Connections, who were being featured by Stead as he travelled with them towards Leeds.

With apologies for the sound quality of both these recordings, which were taped unofficially from the broadcasts when they aired (i.e. holding a voice recorder next to the radio…). Dead hi-tech, we are.