[note: this piece was originally posted on 12th May, but for technical reasons has had to be removed and reposted. The text remains as was.]

This blog post is about two seemingly unrelated events that have taken place within the last week:

Now you might think this is a rather gratuitous attempt to connect things that have nothing to do with each other, but bear with me. First off, here’s the top results of the boat race: 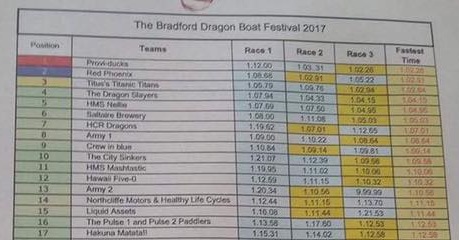 The eventual winners, Provi-ducks (up from third last year – well done them!), are presumably representatives of the Provident Building Society. You can’t always tell a lot from the names these crews choose to call themselves, but Dragon Boat Festivals are conventionally set up (this is true at the annual Leeds Waterfront Festival too) as opportunities for businesses to do a bit of “team building” among staff. For the privilege, they pay a hefty entry fee, which goes to the Lord Mayor’s charities and the organising company.

Last year, however, the newly set-up Higher Coach Road Residents’ Group argued the case for admission to the race as a community crew. They couldn’t necessarily raise the full entry fee, they acknowledged, but they would do their best to raise as much as they could through personal sponsorship. And the Lord Mayor, surely, ought to be allowing community groups to participate — not least a group representing Higher Coach Road estate, since it sits directly west of Roberts Park. The Dragon Boats race along a stretch of the Aire that is visible from some of the residents’ homes! In short, the argument was: it’s our river too. 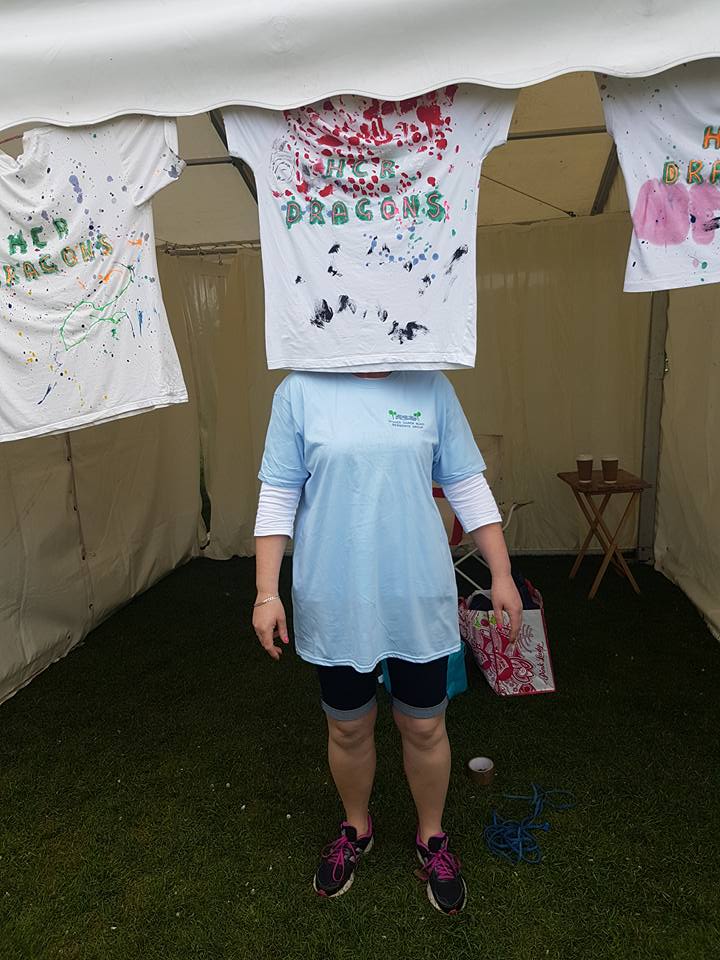 Difficult to argue with, once the point is made. HCRRG’s case was accepted, and the “HCR Dragons” thus competed at last year’s races, finishing 16th out of 45 boats — as reported in this blog post from a year ago. But that was then. This year, the team had its own rendezvous tent, pictured above, at which they displayed the hand-painted T-shirts worn by last year’s team. A year on, the HCR team was bigger, more organised, more prepared, and better dressed: 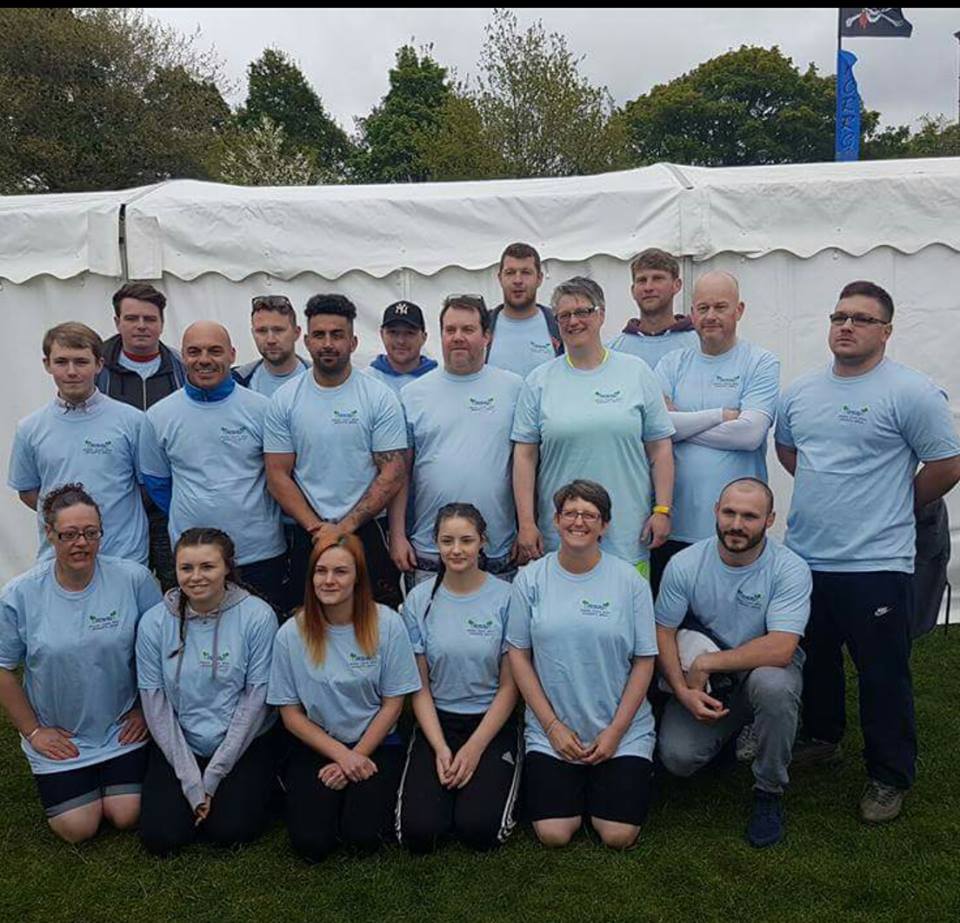 Still, note that Jolly Roger flying on the HCR banner in the background… These guys still see themselves as the pirate team gatecrashing the corporate party, and they were justifiably proud of themselves for finishing right up in 7th this year (one place behind our friends at Saltaire Brewery…). As this year’s team organiser Vicky Christensen memorably remarked in a Facebook comment:

“just shows you don’t need corporate sponsorship or huge companies backing you….couldn’t afford training sessions for any of us but team spirit and a love of our area pulled us together! I’m so proud of HCRRG!” 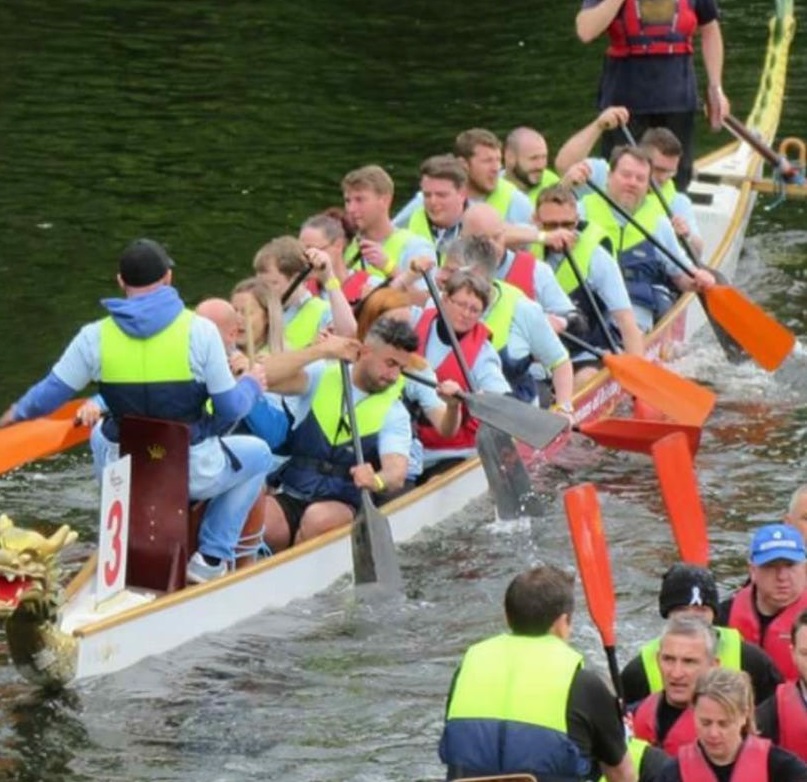 And this is where I move seamlessly (?) on to the development application for Milner Farm — just west (upstream) of the Higher Coach Road estate. The Multi-Story Water team has a longstanding interest in this area: check out our downloadable audio guide Salt’s Waters — which takes listeners on a walking tour that literally loops all the way around Milner Farm (starting from Salts Mill, you go beside the Aire through Roberts Park and the HCR estate, before exploring the tributary streams Loadpit Beck and Little Beck, on a journey to the ruins of Titus Salt Junior’s Milner Field House… before heading down Primrose Lane to the canal and back east towards Saltaire…).

I wrote about the Milner Farm development plans in my last blog post, on the day that Bradford’s planning officer came out in opposition to the scheme. It seemed clear then that the writing was on the wall for the applicants — so it’s hardly surprising that they have indeed now withdrawn from the battle. Technically they could still resubmit a revised application, but after a public online consultation in which objectors outnumbered supporters of the proposals by 1370 to just 6, it seems likely that they will finally back down and walk away. The concerted opposition that has defeated the proposals was, I think, another local expression of what Vicky calls “team spirit and a love of our area.”

We shouldn’t under-estimate just how significant a victory this is. Because the applicants represented a consortium of quite powerful business interests. Powerful enough, at least, for them to presume that they could talk aggressively and dismissively about opposition to the plans when addressing Bradford Council’s executive officers. Just check out the wording, below, of an email written back on 17th March by David Halliday of Halliday Clark Architects — representing the applicants — to Julian Jackson, Bradford’s Assistant Director for Planning and Transport, and sits alongside key corporate partners on the Steering Group of the Bradford Property Forum):

“The applicants and the wider investment group are now extremely concerned at what appears to be . . . continual resistance to this planning application. . . . My Clients are finding it extremely frustrating that your Officers are stepping out of their remit as Statutory Consultees to question the financial stability, business acumen and business strategy with regard to the proposal for a Business & Innovation Centre on this site. The worldwide profile and status of the 3M Corporation is unquestionable as well as the support of Bradford University, Huddersfield University and the Hartley Property Group. We now believe that these U-turns and continual resistance to the application now need addressing at the most senior level with a meeting held between yourselves, the Case Officers, the Chief Executive of Bradford Council and the Leader of Bradford Council, together with representation from the Client Group and ourselves as Agent, to simply address the question as follows. ‘Do Bradford MDC encourage external investment in innovation and resultant job creation or not?'”

The answer to this rhetorical question is of course intended to be “yes, obviously”. As far as the applicants are concerned, it should be self-evident that corporate investment needs to be gratefully welcomed by the local authorities. The council officers who are resistant are thus “stepping out of their remit” — so let’s go over their heads and talk to the headmaster! The arrogance here is self-evident. But it turns out that there is also a big fat fib in amongst the bluster. Dogged campaigner Les Brook went as far as contacting representatives of the 3M corporation, who confirmed that they had very little to do with the application and really shouldn’t be invoked as evidence of the consortium’s “business acumen”. As they explained: “3M has an indirect two per cent beneficial interest in the [Milner Field] project [but] is not involved in nor has any influence over day-to-day operations or decision making on this matter, and therefore our position on the proposal is one of neutrality.” Ouch.

The most spectacular case of the applicants shooting themselves in the foot, though, came with the small matter of Fisherman’s Bridge (and here’s my “water story” for today). Seen in the video pasted above, this is the single-lane bridge across the Leeds-Liverpool Canal, just west of Dowley Gap locks, at the bottom of Primrose Lane… Since the road entrance to Milner Farm is off Primrose Lane, just uphill from the canal, anyone trying to approach the farm from the south (i.e. from Bradford!) needs to cross the canal here. The new “Innovation Centre” development would, self-evidently, have added to the volume of traffic coming across this bridge (the name alone tells you that people would be coming and going a lot — researchers, inventors, investors, you name it…).

Now the developers, of course, tried to claim that the increase in traffic would only be minimal — a mere 3% increase on existing levels. It’s one of the many questionable claims of low-to-no environmental impact that they tried to put forward in defence of building on greenbelt land. But in support their own claims, they had a traffic consultancy (the beautifully named “Paragon Highways“) make a film of peak hour traffic flows across Fisherman’s Bridge. That’s the film pasted in above. And anyone viewing it objectively can immediately see just how potentially dangerous that bridge is! Droves of schoolchildren cross it, mere inches away from the traffic and with no elevated pavement to protect them… The fact that there have been no reported accidents on the bridge is surely more a matter of luck than judgement — it literally looks like an accident waiting to happen — and so Bradford’s Highways Officer opposed the Milner Farm plans simply on the grounds that the bridge is already dangerous enough. The consortium ignored that argument, with the Paragon report translating cars and pedestrians into a series of innocuous-sounding numbers and conveniently avoiding the glaring question of child safety on this bridge… Yet their own video is enough to set alarm bells ringing. In short, the applicants seem to have allowed personal business interests to blind them to the evidence of their own eyes…

The failure of the Milner Farm scheme is evidence, then, that concerted public action (driven by tireless campaigners such as Les Brook) really can make a difference in a world that so often seems to be dominated by an unholy alliance of political and business interests. And the success of this particular campaign, I think, lay in the fact that it drew together people from right across the political spectrum. The motives of the “no” campaign seem to have been many and various. Some wanted to support the interests of the Downs family — the working tenant farmers for whom Milner Farm is home. Some were concerned about conservation – in the small ‘c’ conservative sense of leaving the landscape exactly as we find it (an admirable position in some ways, but ultimately quite difficult to defend: for instance, the Higher Coach Road estate itself would never have been built if a concern to protect green fields was always the primary consideration in any planning decision). Others again simply distrusted the claims of the developers that their impact on the landscape would be minimal… and as an employee of a University I can certainly vouch for the fact that Universities will very rarely leave any land available to them untouched over the longer term…

In my own view, a development at Milner Farm could have been the thin end of a wedge that might ultimately have led to Coach Road itself being extended right through the farm’s landscape to connect up with Bingley … thereby bypassing the problem of Fisherman’s Bridge and creating another Aire valley road link of the sort the authorities so often seem to dream about… Bradford Council’s officers ultimately came out against the scheme on this occasion, but they were certainly encouraged to do so by the concerted public outcry.

It won’t have escaped your notice that Britain goes to the polls again in less than a month, for another general election. At times like this it’s as well to remember that — much as we might sometimes doubt it, we really can make a difference. Let’s all do our homework carefully, and — whichever way we vote — vote wisely…