So, last weekend saw our Multi-Story Water performances happen around and about Shipley and Saltaire. Thankfully, the weather held out for us – with glorious sunshine on the Saturday, and only drizzle on the Sunday afternoon… A few hours later, the north of England was hit by what the Met Office has called “the worst September storms for 30 years”. So I guess you could say we got lucky! And the feedback on the weekend has mostly been very positive (more on that in a subsequent post).

Predictably enough, our scene discussing plans for the hydro-electric screw on Saltaire weir – at the outset of our Green Route walk – proved the most controversial part of what we presented. Indeed Rob Martin, chair of the Saltaire Village Society, was prompted to write to the Telegraph and Argus with the following letter (original link is here):

SIR – It was a pleasure to take part in Multi-Story Water over the last weekend in Saltaire. The boat ride with singing by Eddie Lawler and two walks along the River Aire up and downstream from Saltaire provided lots of information in an entertaining way. Some information, however, was not correct. At one point, the audience stood on a slope in Roberts Park at the site of a proposed turbine house for a hydro power scheme. We were told that once installed it wouldn’t be noticeable. In fact, the slope with four mature trees on which we were standing would become the flat roof of the turbine house, with a railing to stop us falling off. The audience was also told that local people are against generating hydro power from that weir. This is untrue. Saltaire Village Society opposes siting a scheme on the Roberts Park side, but advocates it for the opposite bank, where water power once drove large water wheels for Dixons Mill (where James Roberts built the New Mill).

Unfortunately, however, Rob is himself guilty of misinformation here, not least the claim that New Mill was built by James Roberts. (Titus Salt constructed it in 1868.) The claims he makes about our performance, moreover, are simply untrue. As I have noted in a response to the T&A (remains to be seen whether they publish it), “the performance did not, in fact, make either of the claims that Mr. Martin suggests. He writes: ‘At one point, the audience stood on a slope in Roberts Park at the site of a proposed turbine house for a hydro power scheme. We were told that once installed it wouldn’t be noticeable.’ Nothing of the sort was said. We stated that ‘some have argued that the hydro installation will spoil the view’, but also that ‘the scheme is designed to enhance the visitor experience’ (which it could hardly do if it wasn’t noticeable!). Secondly, Mr. Martin claims that ‘the audience was also told that local people are against generating hydro power from that weir’. Plainly this is not the case, not least because many local people are in total support of the scheme. Our script stated simply: ‘some have argued that this modern installation is inappropriate in a Victorian heritage site’ – a statement which neither side of the argument could dispute!”

In the interests of full disclosure, I am pasting in, below, the whole script for this section of the performance. However, in this fuller blog-post format, I also just want to query Rob’s suggestion that “the slope with four mature trees on which we were standing would become the flat roof of the turbine house.” The particular spot we were standing on, just downhill of the footpath leading to the bridge, clearly remains – in the architect’s drawings of the scheme – a piece of grassy slope with trees: 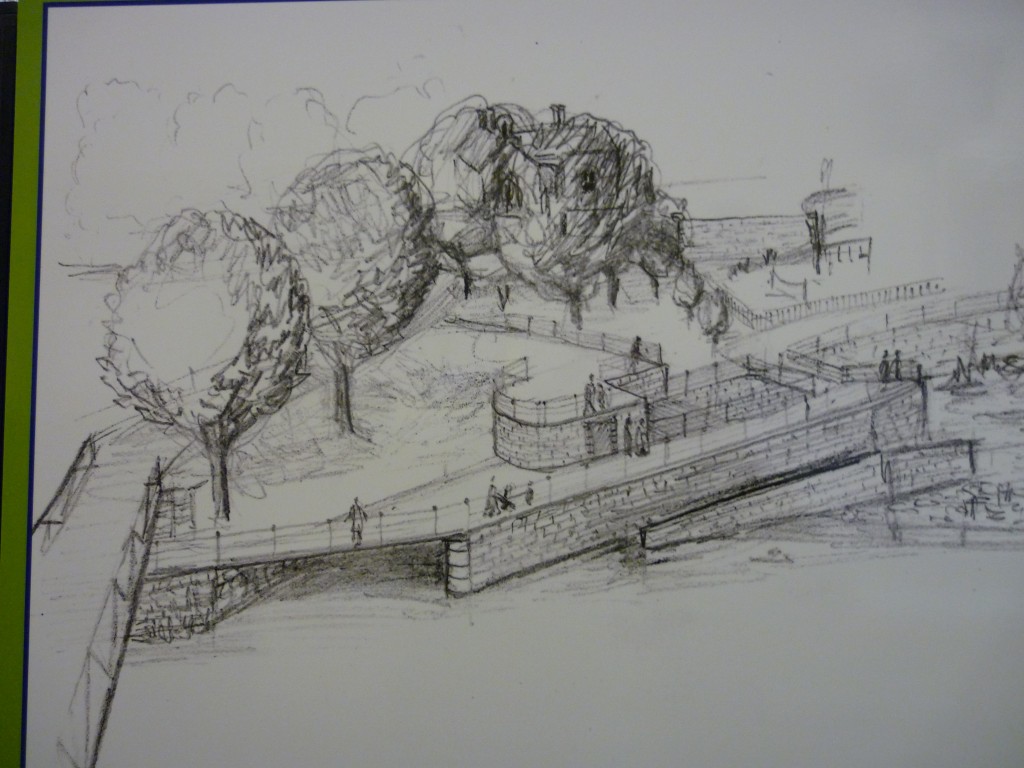 Our scene was placed to the left of this image, on the slope just behind where the lone figure stands at the railings. Actress Lynsey Jones gestured towards the area next to the weir where the turbine house would stand, according to the plans, and pointed out that “currently there’s just a lot of overgrowth” along that stretch of the river’s edge (again, a point which is difficult to dispute). In short, unless the plans for the scheme have been radically revised since the July 5th public consultation at which this and other images were displayed, I would defend the accuracy of our script. It is perfectly reasonable to disagree with our position on the hydro scheme (it’s fair to say that the performance struck a position broadly in favour the proposals), or to dislike the playfully theatrical tone in which we presented the scene (which, I can now see, could be considered insensitive to the very real pain that the arguments have caused for some in the Saltaire area). But that does not mean that anything we said was, per se, untrue.

OK, honour defended, here’s the script section I promised. Judge for yourself:

LIONEL: In the form of a hydro-electric power generator…

LIONEL:  Here on the Roberts Park side, because Bradford Council owns the park –

ALISTAIR:  And it’s Bradford Council that’s proposing a screw in the river.

DOROTHY:  Now, this is proving to be quite a controversial. Some have argued that the hydro installation will spoil the view…  although if you look at the designs, the placement would be here, where currently there’s just a lot of overgrowth…  (pointing it out)

ALISTAIR: You see, the scheme is designed to enhance the visitor experience.

LIONEL: Some have argued that this modern installation is inappropriate in a Victorian Heritage Site…

ALISTAIR:  In that case, so is the weir. Take it down!

DOROTHY:  (ignoring him) … but the CWHPHACIEESS proposes a more embracing, encompassing understanding of heritage.

LIONEL: Not frozen over, but flowing on into the future.

[There then followed a reproduction of sections from an interview with Neill Morrison, of Bradford Council. Admittedly, it was less than “even-handed” to include Neill’s position without presenting a counter-argument, but this part of the script is more interested in the wider “climate change” argument than the hydro scheme per se…]

REPORTER: According to Bradford Council, the future could be stormy.

SIGNAGE 1: BE PREPARED TO TAKE ACTION!

REPORTER:  Said the signage at the recent public consultation about the proposed hydro installation.

SIGNAGE 1:  ARE YOU READY FOR CLIMATE CHANGE?

SIGNAGE 2:  The weather in Bradford is changing. We must adapt our property, communities, and lifestyles for more extremes of weather, such as..

REPORTER: (to herself)  Crikey!  (beat – then, to the public…) We spoke to Neil Morrissey.

NEILL: I get that all the time.

NEILL:  You look at how the weather’s changed over the last thirty years… we’re getting more extreme weather, more often. Every year it’s the wettest June or the driest January … This year we’ve had this weird situation where the rivers were really dry in March and April, when they should  be stonking – and then in June when they should be at base flow and nothing spare, it was pumping out here for weeks… I kayak for a hobby so I notice it. And down in Calderdale, they had the worst flooding in recorded history…

REPORTER: But is it Bradford’s responsibility to solve climate change?

NEILL: (a small sigh) It’s everyone’s responsibility to solve climate change.  There is no, ‘whose responsibility is it?’ That’s part of the problem, that’s why stuff doesn’t get done – everyone’s blaming someone else.  You can’t use that as an excuse any more. You have to – do something!

REPORTER: But surely something like this hydro is just a drop in the ocean of what’s needed.

NEILL: Of course. But you cannot have one thing that will fix the situation. You’ve got to have lots of schemes, lots of technologies, and they’ve got to complement each other.  So you start by looking at what we can do in this district – and at the assets we have. We have waste, which we’re working on… we have wind, but frankly the argument over wind will make this look like a storm in a teacup. Imagine what the Bronte Society would say if we said “oh we want to put wind turbines on Top Withens.” You cannot blend them in! But we think we can blend this in…  With hydro, there’s a chance here. It’s about making the best of what you’ve got.

Anyway, I hope that puts the record straight. But perhaps, considered in the great scheme of things, this is all just (as Neill put it) a “storm in a teacup”… We have bigger storms to worry about.