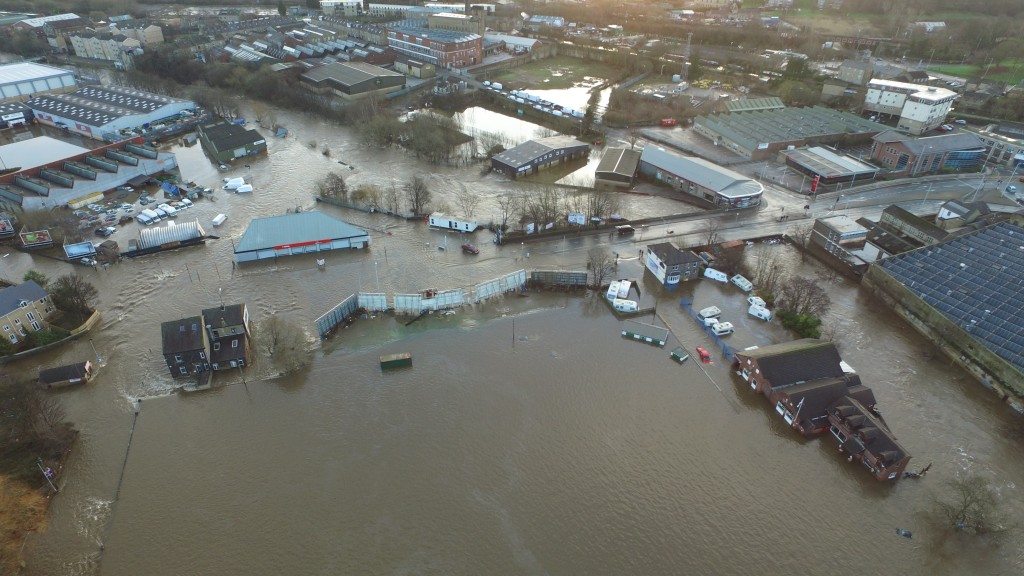 Tomorrow, Sunday 18th December 2016, we’re holding a Christmas party at Baildon Woodbottom Working Men’s Club for the Higher Coach Road Residents Group — and other invited members of the local community. We held a similar event around this time last year, shortly before the club was devastated by flooding on Boxing Day. That’s the club’s buildings, there, on the lower right of the photo above. The ‘proper’ river is to its right, and the lake that was Woodbottom cricket pitch is to the left. This was 27th December 2015, as the flood water was starting to recede. 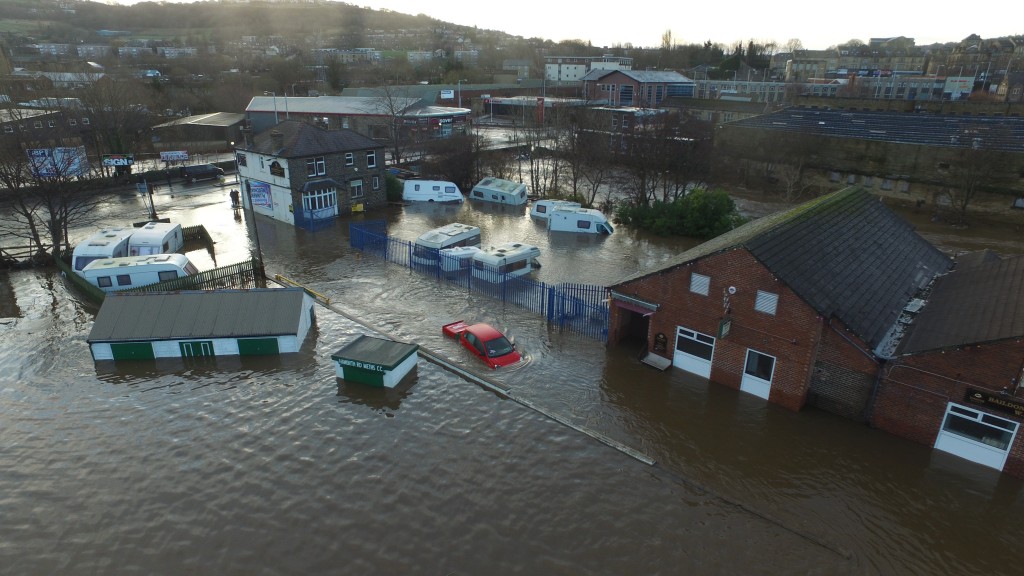 Here’s a closer view of the club and adjacent caravan park… And below, another view as the aerial drone camera turns clockwise to show the rest of the club and the upstream area. 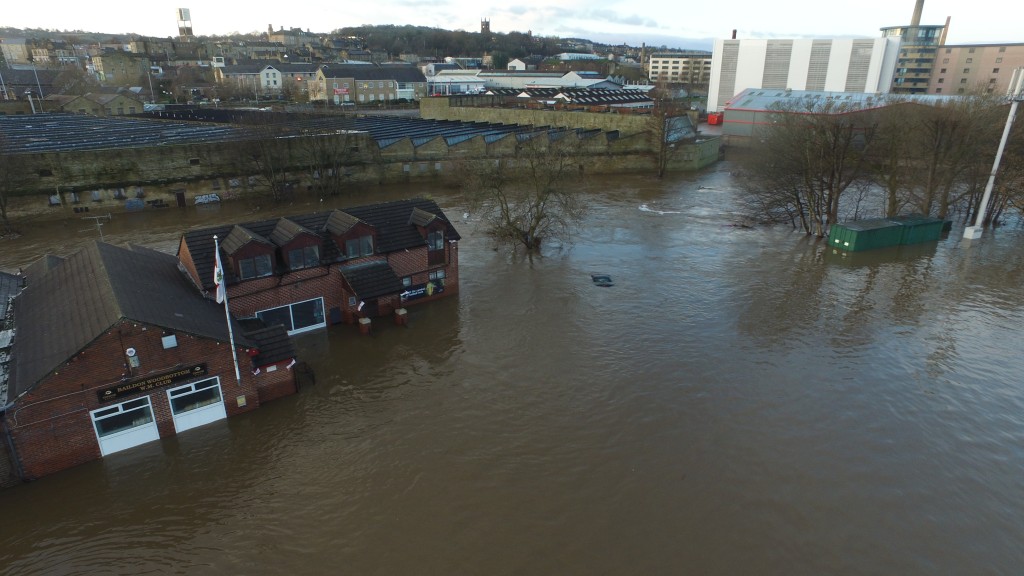 Below, moving further upstream but looking back — a higher and wider shot of the whole area. Here, the main course of the river is much clearer, just off to right of centre. The club is in the middle towards the back of the shot, and in the foreground, Baildon Rec and the local Sea Cadets hall. 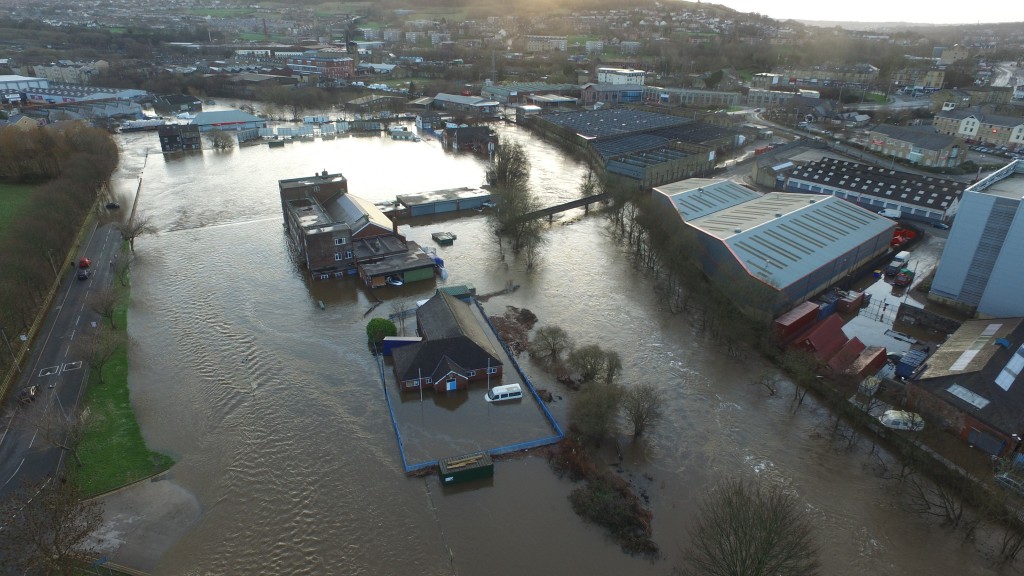 Then, below… just a little further upstream still, and turning clockwise again to look west, we have the four houses of Aire Close — right next to the river — and the Victoria Mills complex on the opposite “bank”. In the distance, to the west, is Saltaire. Notice the visible watermark on the buildings in this shot, since the water is already well down on where it had been the previous day: 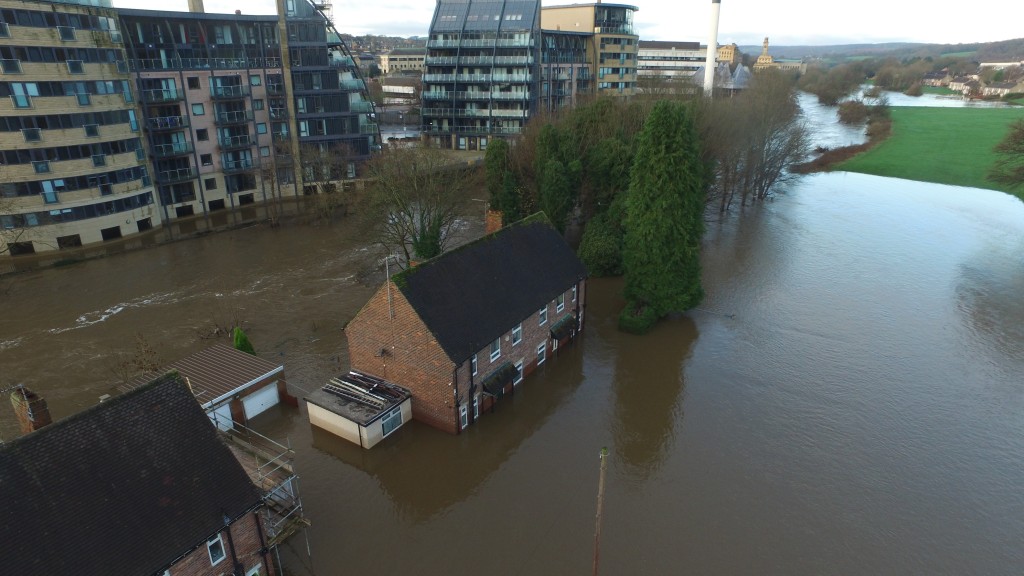 I’m very grateful to Brian Tuxford, of Northway Vehicle Sales (on Baildon Bridge) for sharing these images with me and allowing me to put them up on the blog. I featured Brian a few weeks ago, in this blog post, but it’s taken me a while to get these images up (because the CD he gave me had got corrupted somehow, and I had to get technical support to recover the photo files). Anyway, it seems appropriate to share them at Christmas — one year on. 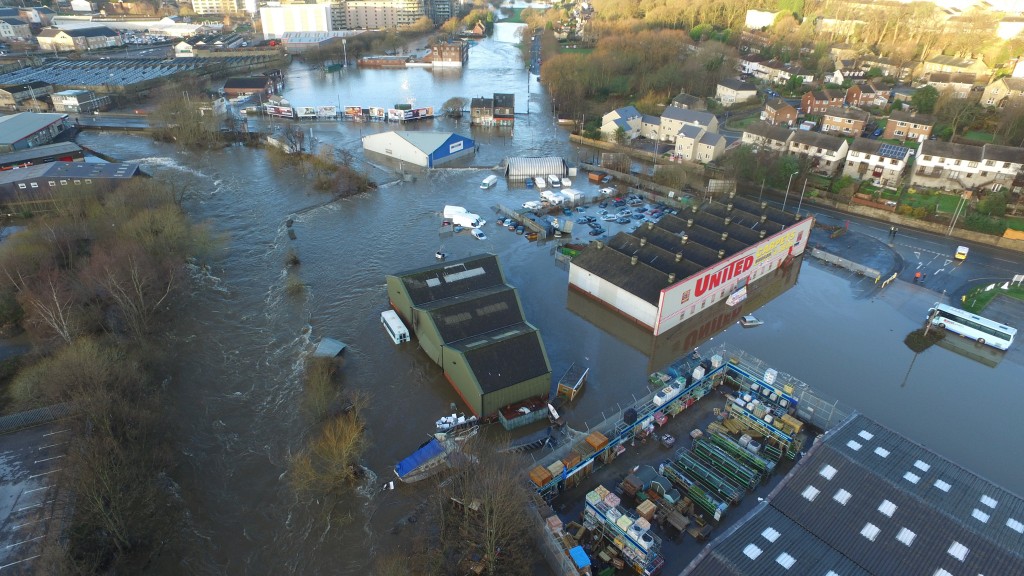 Above, we see the view from just downstream of Baildon Bridge, looking west. The cricket pitch etc are to the back of the shot now, and in the foreground we see the retail area east of the bridge, off Otley Road… United Carpets, and in the bottom right, the garden centre section of B&M. The river channel proper is to the left. The collection  of white vans in the middle of the shot is part of the Northway Vehicles fleet — the part that hadn’t been swept away by the flood — and you can see here just why Northway’s compound was in exactly the worst place as far as the flood was concerned… right in harm’s way as the water diverted across the cricket pitch tries to find its way back into the main channel. Below we see the same scene in reverse (i.e. the other side of United Carpets is now to the left; the river is to the right), and here you can get a very clear sense of the trajectory that would have been taken by the 37 vehicles swept downstream off the Northway lot… 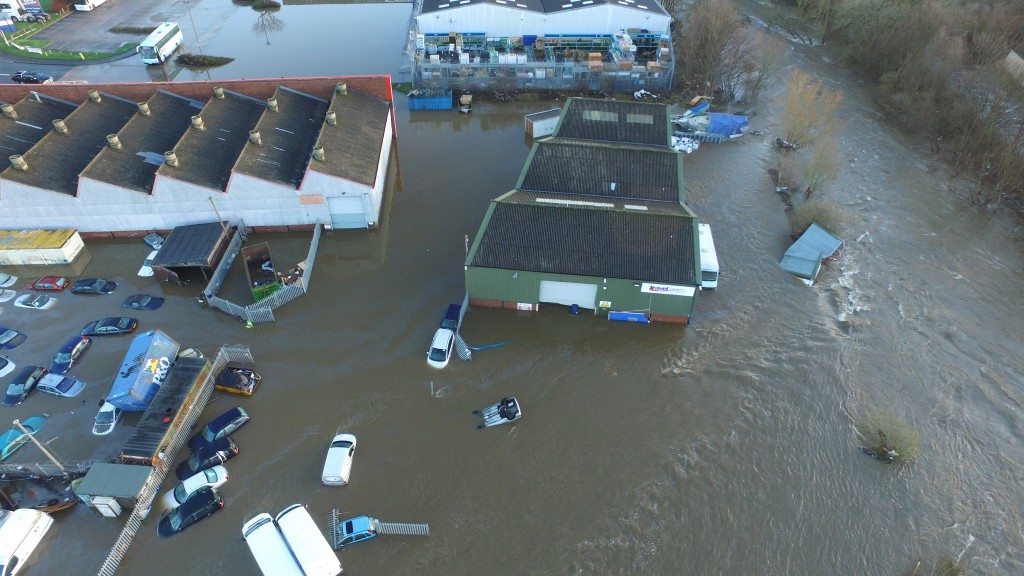 The shot below gives some sense of how bright and sunny it was, on the day after the storm. Again we’re looking west, with the club to the left and the Rec in the centre of the shot. In the lower foreground is Otley Road, coming away from Baildon Bridge… 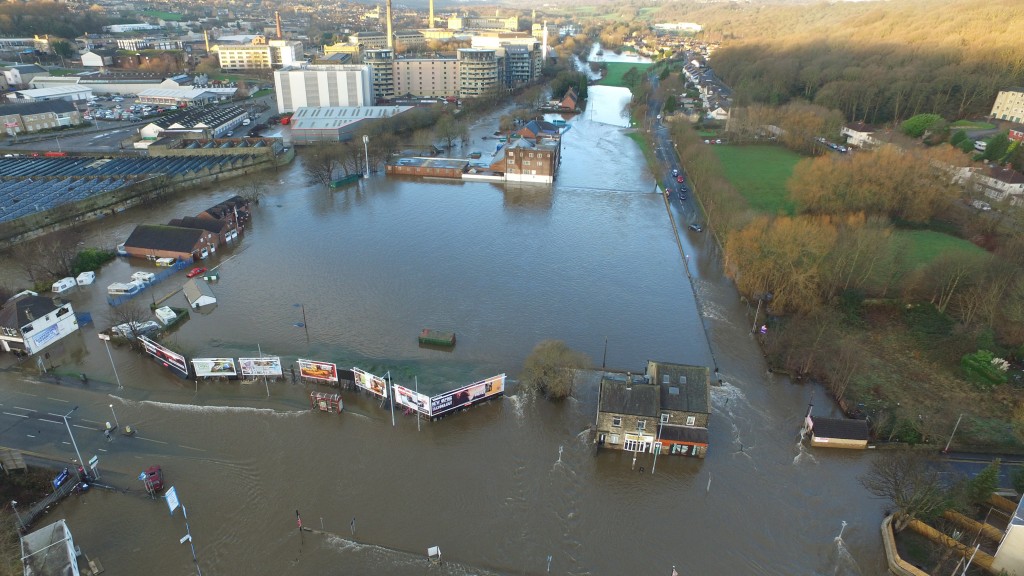 If you compare the shot above with the shot below — which seems to have been taken later in the day, when the water level had further receded — you can see how more of the road is now visible. And how the worst flooded part of it is actually around the junction with Green Lane… The bridge itself, to the left, and everso slightly raised to cross the river, is by this point comparatively dry. Which may be why the vehicle trying to ford through the flood water had thought it safe to ignore the road closure signs at the other side… 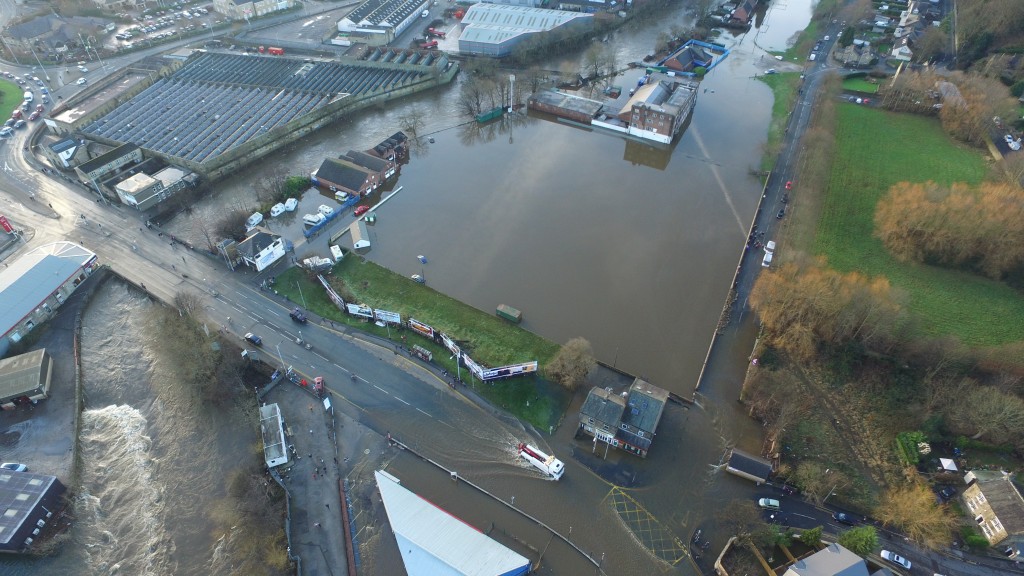 Particularly clear from this photo above is the way that the main river channel goes through a noticeable curve or bend as it comes under the bridge. Hardly surprising, then, that in high water — and with the channel under the bridge itself partially blocked by debris — the river diverts itself straight across this area, in a sort of “short cut.” 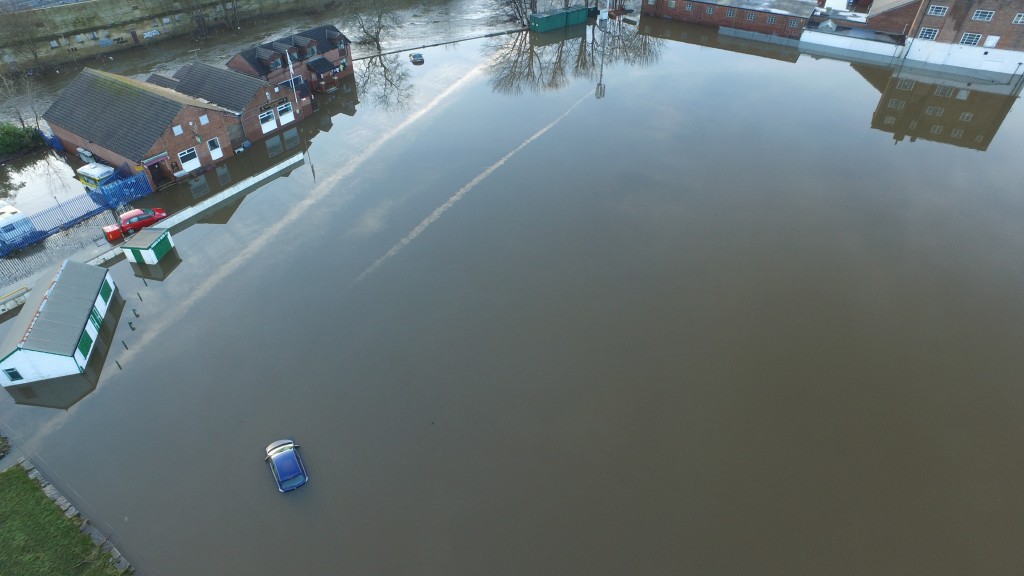 Finally, then, back to the club. And the vapour trails in the sky, reflecting in the standing water on the cricket pitch. And one, stranded blue car, which is not going anywhere fast.

Merry Christmas, one and all.