It was a pleasure and a privilege this last Thursday evening, December 8th, to have the opportunity to perform Too Much of Water, my one-man show about the Shipley flood last Christmas, at Leeds Industrial Museum — aka Armley Mills. The occasion was the opening of a special exhibition titled Flood Response. A single room in the basement of the museum is jam-packed with varied, colourful, striking exhibits documenting the impact of the Boxing Day flood in (mostly) Leeds. As the title implies, the exhibition looks at how communities in Leeds, especially in Kirkstall and Armley (the mill itself was directly hit by flooding), responded to the flood, often by showing a surprisingly festive spirit of resilience and co-operation, and thereby turning a crisis into a form of community-building. In the same spirit, the exhibition itself is labelled a “community exhibition”, and as such is composed largely of material donated by members of the public, rather than being professionally produced or commissioned. 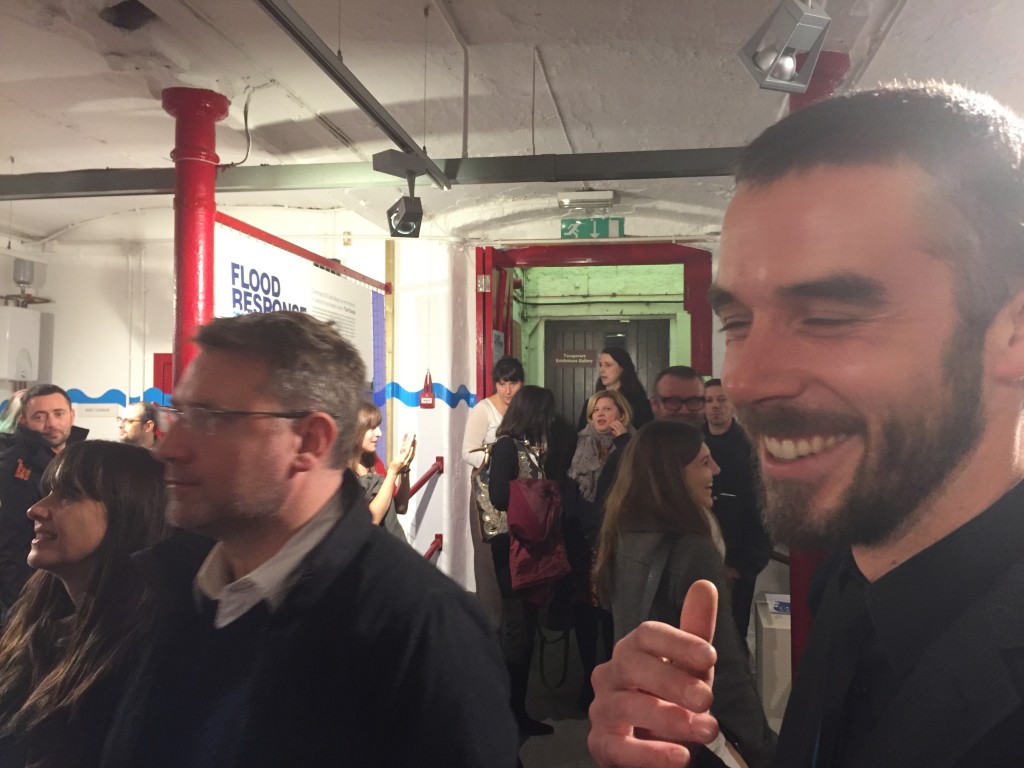 The curator of this rather remarkable display is Chris Sharp, pictured here on the right — his first big project for Leeds City Museums. He’s done a tremendous job (I really do recommend you visit). The exhibition was officially opened by Councillor Judith Blake, leader of Leeds City Council, pictured below during her speech, during which she spoke with real passion about the city’s response to the flood crisis.. 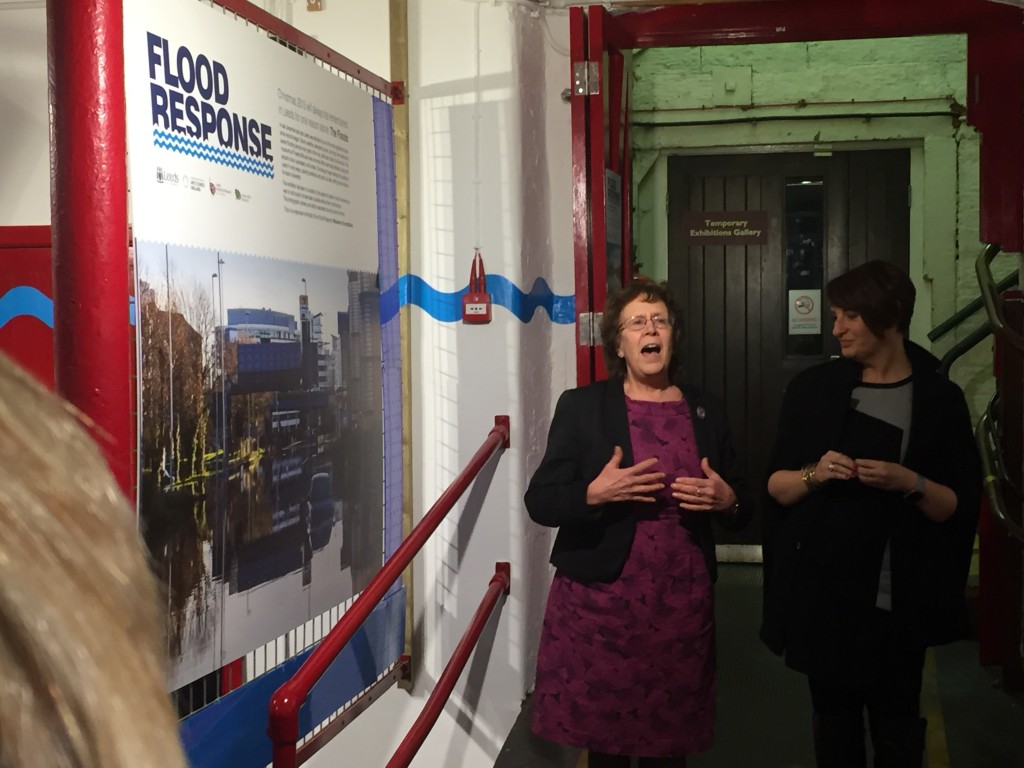 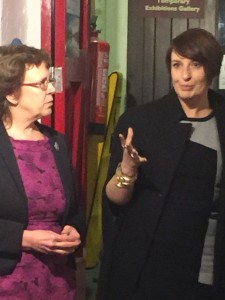 To Councillor Blake’s right here is Councillor Lucinda Yeadon, deputy leader of the council and (more to the point in this context) the ward representative for Kirkstall. As such, she was directly involved in the community response to the flooding along Kirkstall Road, and she really does seem to be one of those (rather too rare) politicians who inspires the confidence and affection of her local community. The exhibition opening itself was attended by quite a diverse crowd of invitees, enough to pack out the exhibition space, but here too the spirit of inclusion was apparent. This wasn’t just the predictable collection of luvvies and bigwigs you might expect to see at an exhibition opening, but a cross-section of people from the local community who had got involved in the flood response effort, in one way or another. (And here’s a few of them…) 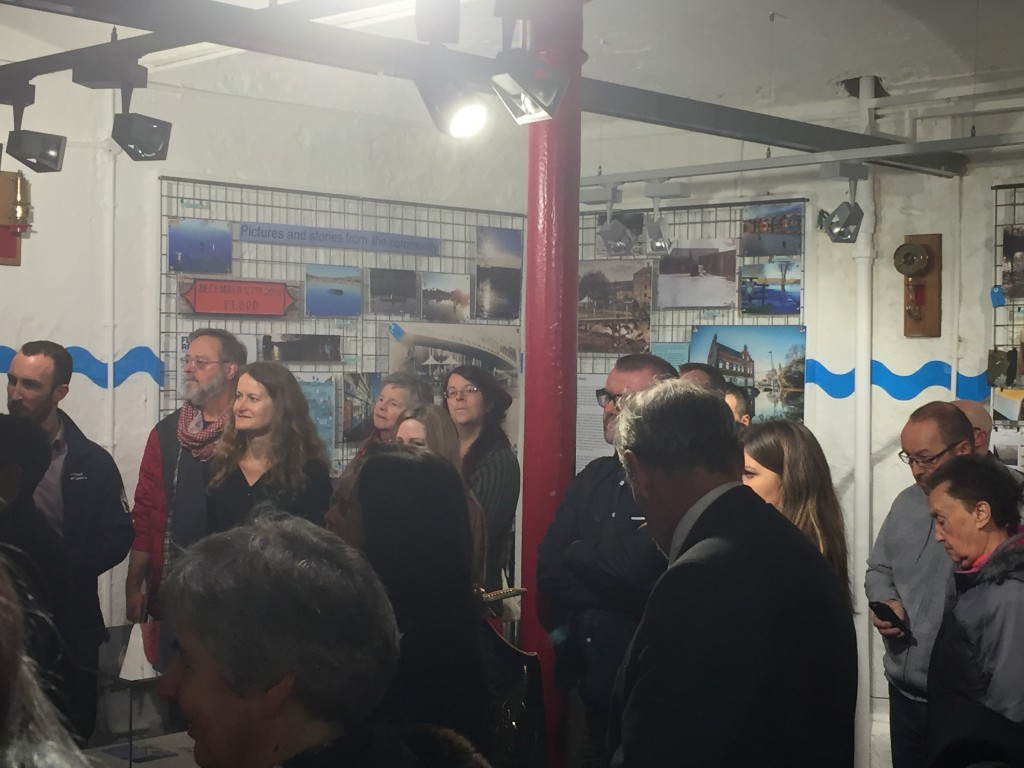 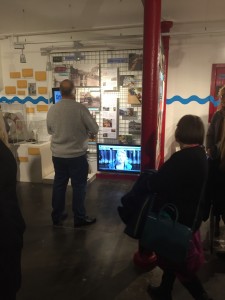 I’m very pleased to say that Multi-Story Water’s own contribution to telling the story of the Leeds flood response is on display as part of the exhibit (which will run for six months). Our promenade performance After the Flood — devised for Leeds Waterfront Festival in June — is on display in a new film version. We completed editing just in time for the exhibition opening. And OK, yes, some kind of technical glitch meant that the film file wasn’t playing on the digital screen designated for it on Thursday (i.e. the one to the left of this chap’s head, in the picture on the left), so it had to be temporarily installed on  an alternative screen at ground level. This hiccup should be resolved soon, though. And in the meantime you can also view the film online… Just look for After the Flood under the “Films” tab on the menu bar above… 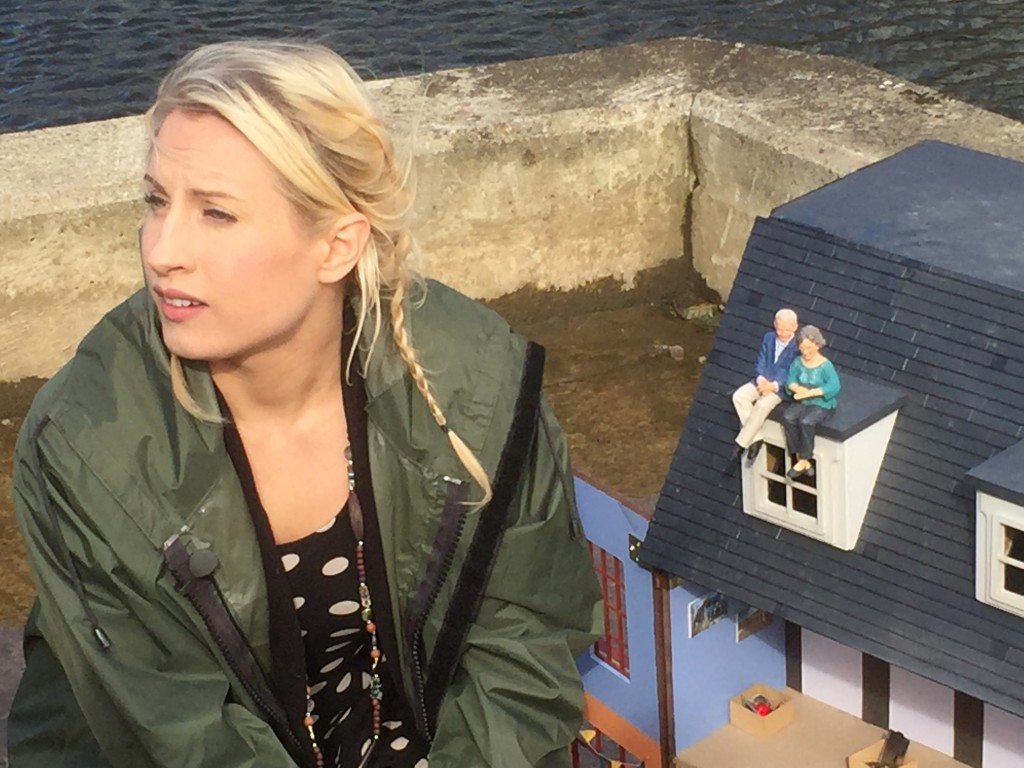 This is actor Kat Martin — who you can just about see on the screen in the exhibition shot above — performing ‘live’ in After the Flood, as “Poppy”, a young woman whose family’s business on Kirkstall Road was badly affected by the flood. (The doll’s house represents the business, and the small figures are Poppy’s parents…) I’m really rather proud of this piece, made in collaboration with Simon Brewis’s Common Chorus Theatre, but on Thursday night, attendees at the opening were too busy milling and chatting to concentrate long on a video screen… Instead, after the speeches were over, they were invited upstairs to the museum’s cafe space for my live storytelling performance, Too Much of Water (both it and the ATF film were requested by Chris Sharp for the exhibition and opening – thanks for the opportunity, Chris).

Anyway, here I am, as pictured/tweeted by Geoff Roberts… 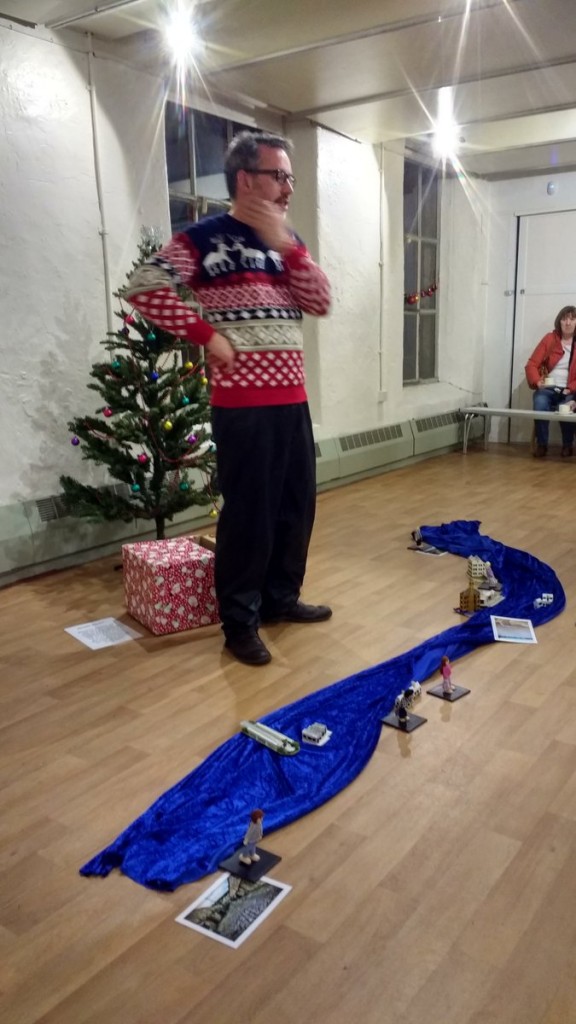 When I originally performed this piece in Roberts Park, for Saltaire Festival, it was mid-September and the Christmas tree and jumper seemed amusingly quirky. Since then, I have performed it around the country (Exeter, London, Cambridge, Manchester, Leeds), and I’m aware that by now — in December — I’m in danger of looking like I’m just trying too hard to be seasonal. Be that as it may, the performance was very well received by attendees at the opening, several of whom made a point of introducing themselves afterwards and thanking me personally (which was very nice – thankyou!).

What people find moving, I think, is the piece’s focus on some of the smaller, more human details of how people were affected by the flooding (the script draws from interviews with a number of people in the Shipley area, who are represented by the small wooden figures). I was especially flattered by the suggestion of one senior flood risk officer, who saw the piece on Thursday, that anybody who works with people affected by, or at risk of flooding (be it for the Environment Agency, local council, or whatever) ought to see this piece, because it will help them reflect on what it’s really like to be in those circumstances. High praise indeed.

On the other hand, I heard on Friday — from another friend who couldn’t attend the opening — that a couple of his colleagues at the Environment Agency, who had been at Armley Mills to represent on Thursday, had felt slightly uncomfortable watching the piece. They wondered if I was attacking the EA’s warning efforts in Shipley around the time of the flood. I’d just like to say, publicly, that I’m really sorry if they felt that way, because this was never my intention. Yes, certain details are documented in the show, as seen from the point of view of my interviewees, that might perhaps be seen as not reflecting all that well on the EA, but I was very careful in writing the piece not to make any comment either way — simply to represent the facts as best I could establish them, and let spectators draw their own conclusions. And I do make the point in the show that the Agency too, in its own way, was inundated on Boxing Day — struggling to keep up with the pace of events as the crisis unfolded in multiple towns, in multiple catchments, simultaneously. They, too, are only human.

With that in mind, I’ll close here by pasting in Scene 5 of our After the Flood film — “the Agency Man”. Hopefully this provides some sense of just how tricky the EA’s job is, in terms of Flood Response – often having to be all things to all people. In my (finite) experience, they usually do a great job, in often very difficult circumstances.