If you live on the Higher Coach Road estate, you should have been invited (this week) to a neighbourhood meeting at the rowing club on the morning of Saturday 18th April, from 10.30am. Organised by Shipley’s Kirkgate Centre, in conjunction with the Multi-Story Water project, this an opportunity for residents to share their thoughts and concerns about the neighbourhood and maybe dream up some future improvements… We also have some suggestions for a bit of a community festival to take place on the flood plain area in June, which we’d really like your input on. 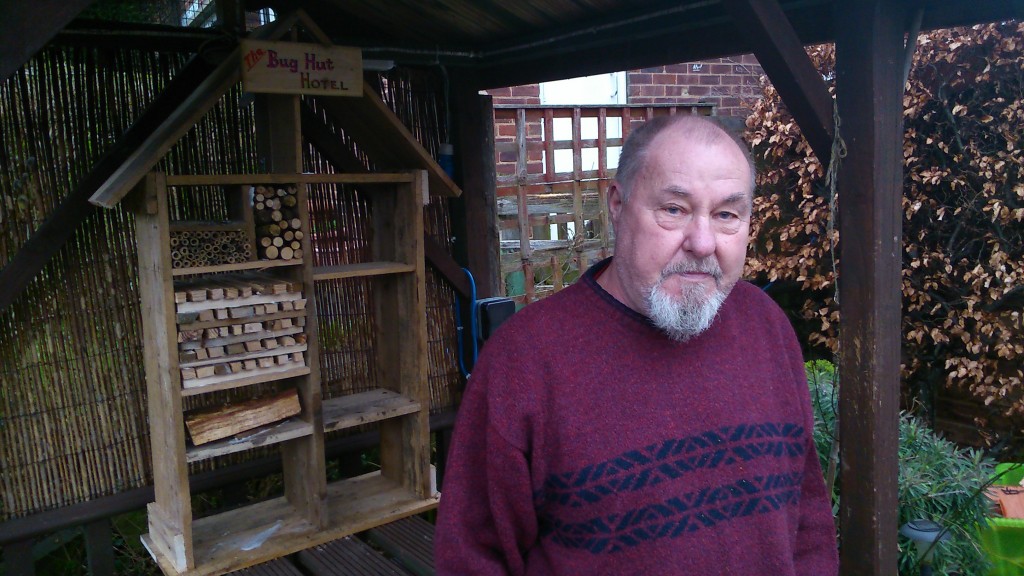 This is Stewart Gledhill, of Troutbeck Avenue, standing in his front garden in front of the “bug hotel” he has built for the remarkable new nature reserve that Hirst Wood Regeneration Group have been developing on the other side of the canal. Stewart and his wife Pat (of whom I also had a really good photo that has somehow got accidentally deleted!) have been actively volunteering on that project, but they have also dreamed up a solid plan for what they’d like to see happen on the Baildon side of the river. Stewart sent me a detailed letter this week, which you can read here, accompanied by a sketch diagram of the esate, which you can see here. (Uploaded with his permission.)

Responding to an earlier discussion, Stewart has come up with a proposal to turn the muddy, uneven track beside the river (running the length of the Higher Coach Road estate) into a proper path. His suggestion is to use the same impacted hardcore surface that has been used on the footpath running past the rowing club, and indeed on the paths in the new Hirst Wood nature reserve. Stewart has proposed 3 stages that this could be accomplished in, and has even come up with a rough costing. His plan is a great conversation starter… will other people want to get onside with this idea, or maybe propose alternatives?

Stewart’s plan would be to build the path pretty much where the existing track is, and not do too much to disturb the trees and bushes along the riverbank (which provide important habitat for local wildlife). Pat, though, added a suggestion for a pond area with a view of the river, near the footbridge. She points out that some of the trees on the riverbank do need managing, if they’re not to becoming hazardous. She pointed this out to me, for example… 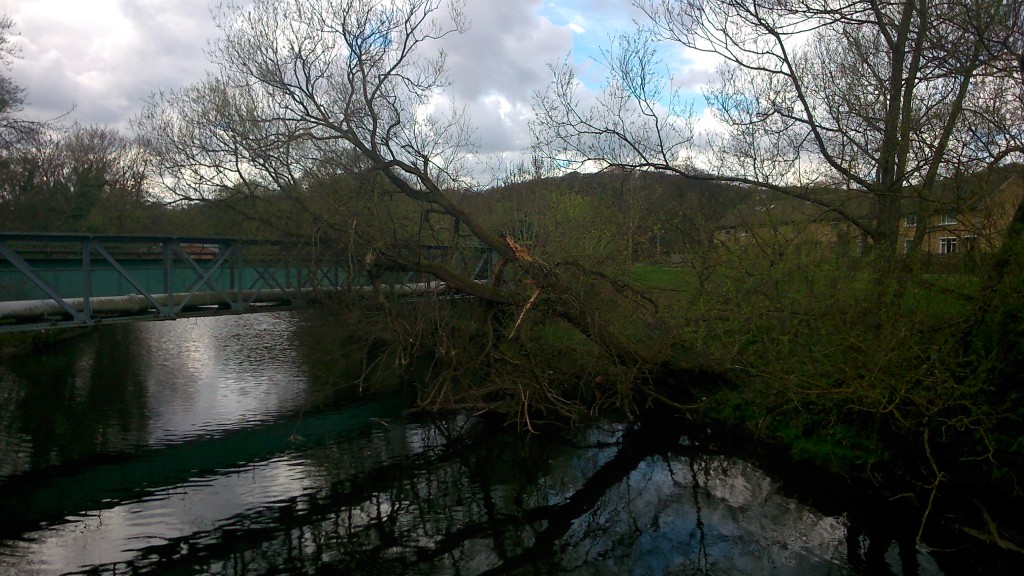 This tree came down, Pat says, in just the last week or so, given the high winds and rain we’ve been having. It has fallen across the pipe bridge of the Graincliffe Acqeduct (which carries Shipley’s water supply down from the moor and across the Aire at the end of the estate). If this large tree ends up in the river — as seems inevitable — it could end up causing a serious obstacle in the water … it might catching on Saltaire weir, where another tree has also lodged recently… If it got downstream as far as Baildon Bridge, it could create a serious damming hazard there (a recurring problem there, which has caused flooding in the past). The question is, though, who is responsible for clearing the tree? If it was actually in the river, it would be the Environment Agency’s job to clear it — but placed where it is, suspended on the acqueduct, it may be Bradford Council’s… One of those tricky jurisdictional issues that often don’t get solved easily. All the more important, maybe, that local community members take the initiative sometimes?