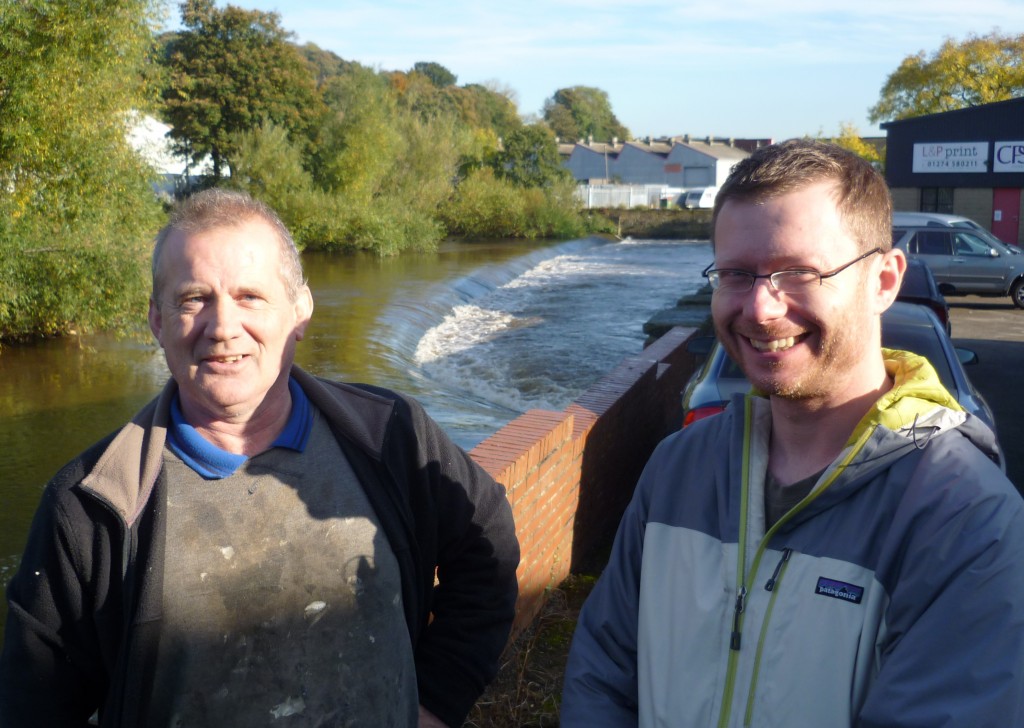 Today, perhaps, we may just have started something. I met with Philip Moncaster (left) and Paul Gaskell (right) at the weir just downstream of Baildon Bridge (between their heads), and we discussed the possibilities for getting the weir removed once and for all. This has long been a goal of Philip’s, who lives right on the river upstream of the bridge, and is also secretary of the Baildon Woodbottom Working Men’s Club, which stands almost next to the bridge. (Anyone who came along on the “Red Route” section of our Multi-Story Water performance tour of the area will remember that we based one of our main characters on Philip.) He believes that getting rid of the weir would significantly reduce flood risk at both the club and his home — and in all probability he’s right. Baildon Bridge is the major flooding pinch point in the Shipley/Baildon area (this was the case in both 2000 and 1947), because debris in the river can all too easily get caught around and across its thick concrete stanchions. This can create a dam effect, which the solid-walled sides of the road bridge itself only add to… 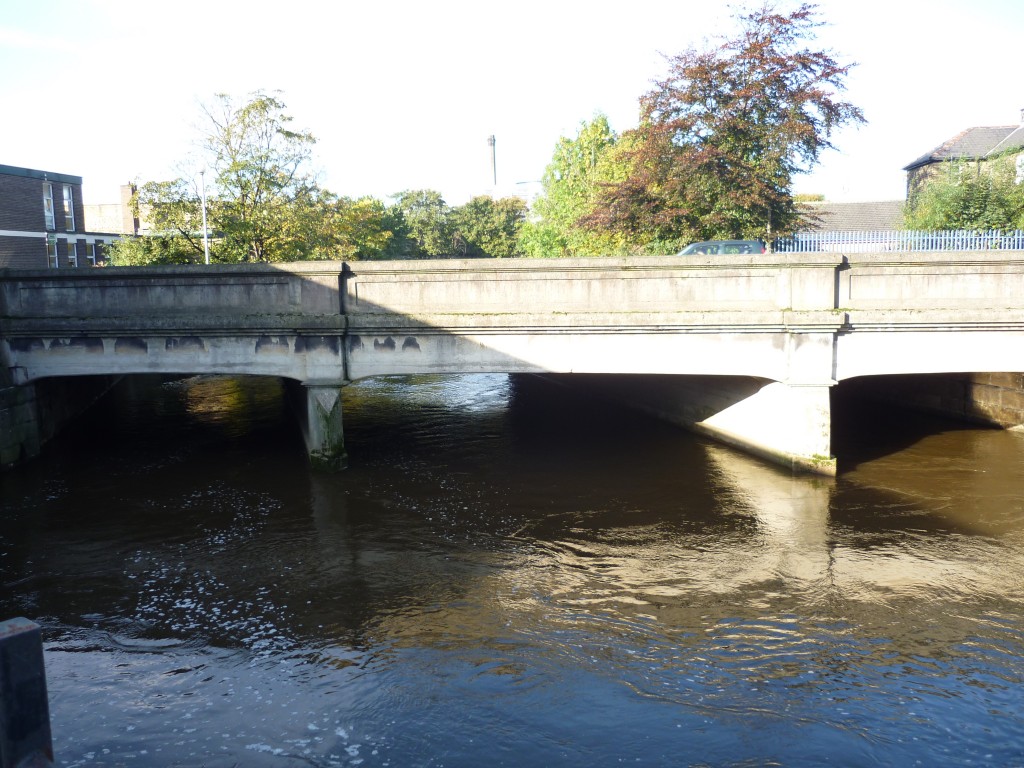 When the bridge turns into a dam, the water simply re-routes itself off around the club and across the adjacent cricket pitch (people were swimming on it in 2000, Philip mentioned!). But it doesn’t take a rocket scientist to figure out that if the water level going under the bridge was lower to start with, the level of flood risk would also be reduced. And taking the weir out would surely help to lower the water level, because a weir is itself a small dam that artificially raises the water level on the upstream side.

All this begs the question why the responsible authorities (mainly the Environment Agency and Bradford Council) have never done anything about this before. But for whatever reason, it simply isn’t on their “to do” list. Indeed, Philip has been told by the Council that if he wants to campaign for the weir’s removal, that is fine with them, but he would need to raise the money not only for the work, but for the consultation process that would allow the work to be done. Unsurprisingly, Philip is unimpressed with this response!

This is where Paul Gaskell comes in. Paul is based in Sheffield, and works for a charity called the Wild Trout Trust. I met him at a “think tank” workshop held this July by the Environment Agency, looking at “river stewardship”, and I learned then that one of the things Paul is particularly keen to campaign on is the removal of old weirs. For him, the major issue is not so much flood risk as the ecological health of the river itself. Weirs interrupt the natural “geomorphology” of a river’s flow, causing sediment deposits to build up on the upstream side, but conversely adding to river bed erosion on the downstream side – because water flowing over the top of the weir (minus its low-flowing sediments) tends to ‘dig into’ the bed as it comes down. All of this has consequences for the general health of the river, and of course weirs particularly affect the ability of fish to move up and downstream (hence the Wild Trout Trust interest).

Because Paul knows so much about all this — and particularly about the kinds of obstacles that get thrown up to prevent weirs being taken out — I invited him up to Shipley to meet with Philip. Maybe Paul could point Philip in the direction of the right people to help him overcome the administrative inertia. What was clear from our very positive meeting was that we can all see benefits in our putting some energy into pursuing this. Obviously, for Philip, it’s a longstanding concern, but Paul also thinks that this particular weir could make for a valuable “case study” site that might help prompt further action elsewhere. One of the blockers to action on weirs that he has often encountered is the “heritage” dimension, whereby people think that weirs represent an important part of their local industrial heritage (although apparently there are ways to remove them that still leave in a sort of ghost trace of the “heritage” structure, if desired…). With the Saltaire World Heritage Site only a few hundred yards upstream, the removal of this weir could be particularly interesting from the “cultural” point of view — and that is of course where my personal interests lie, as a theatre-maker and researcher: could we make the process of removing the weir into a “creative process” of sorts, one aimed at developing dialogue and understanding around the relationship of human heritage and the natural environment? (Perhaps, when Philip eventually gets to climb in and smash it up, we can stage a bit of a party around the action! … And yes, he’s keen to be involved in the work itself – as a builder he knows quite a bit about both construction and destruction…)

All of that said, Philip himself is not sure that local people care too much about this particular weir, or any heritage value it might be seen to have. He’s collected hundreds of signatures on a petition for its removal, and has encountered only a couple of objectors. In all likelihood, the big obstacle is going to be the red tape — the consultations around what the downsides to the weir’s removal might be. Ironically enough, Paul believes that the main issue is likely to be the bridge. The removal of the weir would probably mean water flowing downstream a little faster at this point, and there’s a chance (small!) that this might impact negatively on the bridge’s foundations. The Environment Agency, Philip notes, will also want to establish whether or not anyone downstream will be negatively affected by the weir’s removal, although it is hard to see how that could be the case.

Basically the outcome of our meeting was that taking out this weir is probably a win-win from every angle, and that it’s the red tape that will be the main problem to getting it done. Paul also noted, however, that some regulations may be working in our interests. One of the provisions of the European Water Framework Directive (WFD) is that governments and local authorities need to work towards freer movement for fish up and down rivers (for good ecological reasons besides happy fish), and indeed fines can be levied if not enough is being done to pursue this goal. This was news to Philip, who was delighted to hear that there is a stick as well as a carrot for the relevant authoritiees… In some places, Paul mentioned, fish passes have been built onto weirs to address the WFD requirements. And yet the process of designing, consulting on and building a new fish pass is vastly more expensive — and less ecologically beneficial — than simply removing a weir. Paul mentioned that a fish pass can cost around a quarter of a million pounds — as against the twenty or thirty thousand it costs to remove a weir. According to Philip, the actual construction of this weir at Shipley cost less than £400, back in the day… How times change.

So numbers were exchanged, diaries consulted, and the beginnings of an action plan agreed. We’re all very busy over the next couple of months, but hopefully our meeting will be the beginning of something… Please do get in touch if you’d like to help! 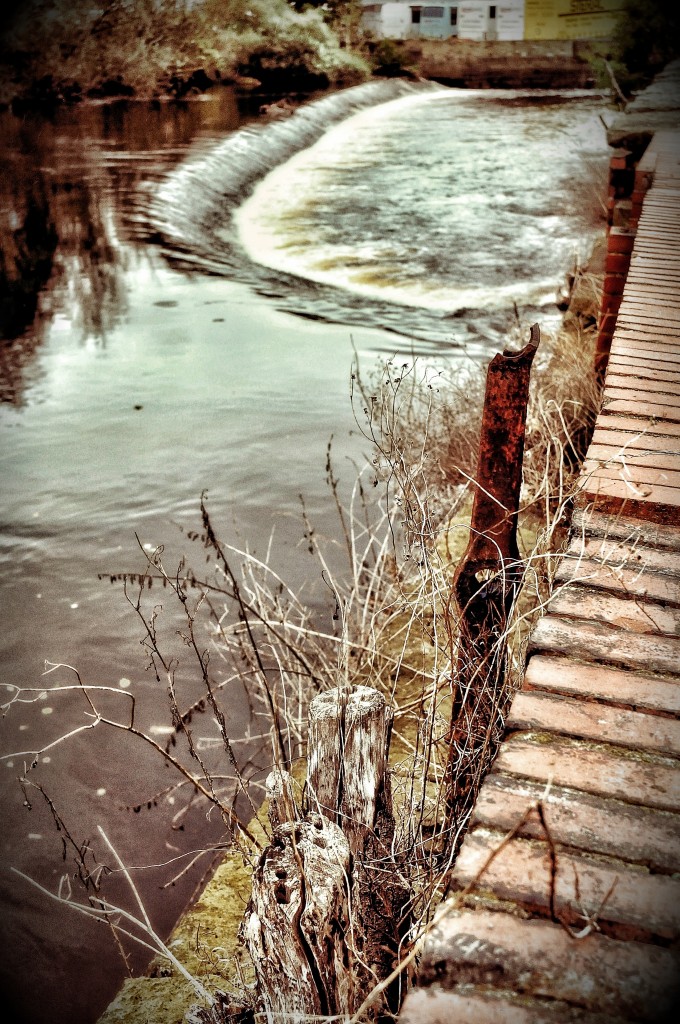 Yvonne Roberts’s photographic rendering of the weir from the Shipley side.